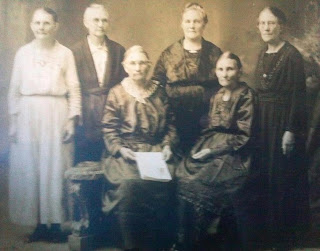 I believe that is Mary Ellen Mitchell Whitt on the far right. Her sister who, was called "Spec," is seated beside her. I believe Betty Mitchell Whitfield, another sister, is one of the two women on the left. The other women may be Ellen's sisters Sara and Margaret. Not sure about the lady in the back. I base this on an old picture I have. Source: Karen Wade Avants Email 15 February 2012.
Posted by RSF at 5:12 PM