Woods Reveal Ruins of Landmark
By Bernard (Staff Writer)
The Bee (Danville, Virginia)
May 19, 1993
(click on photograph for larger image) 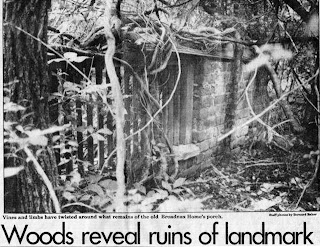 A walk in the woods near the Wood Fiber Industries plant reveals what remains of one of Danville's landmark homes. Local historian Danny Ricketts called a few weeks ago and said he had found something I would really like. I took the bait. Don't get me wrong. I love history, but it's a walk in the woods this time of year that improves other sensory skills.

When Danny calls, I know it's not going to be a wild-goose chase. Danny spends a lot of his time in the courthouse in Chatham looking up information about old families in the area. Danny's not going to say he discovered that Jimmy Hoffa is buried at Whitmell, and he knows where. No, when Danny calls, it's certain he's done his homework. So, he takes me out to the spot off Gypsum Road to take a look at the old Broadnax House. The first part of the hike is easy. A utility road makes for easy walking. Then, the woods get thick. The briars are like machetes, cutting through clothes and skin. It's snaky. The ruffle of an occasional shotgun blast can be heard in the air. I feel like Ronny Cox to his Jon Voight -- and we're not 500 years from the road. 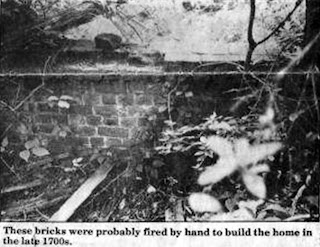 Records from Chatham show that the site of the house originally belonged to Danville's founder, William Wynne. Wynne received the property from a land grant March 16, 1771. Wynne sold the property to Thomas Fearn on April 17, 1778. The property totaled about 165 acres at that time. Wynne, along with a Thomas Fearne, signed the petition to ask the legislature to create the tobacco inspection station which became Danville in October 1793, according to Maud Carter Clement's The History of Pittsylvania County.

In 1797, Fearn was named one of Pittsylvania County's justices of the peace. Fearn died in 1805, and the property was transferred to his wife, Mary. After his death, Mary married a man identified only as Mr. Dodson. Mary, and her son, George, sold two-fifths interest in the property to James D. Patton in 1823 for $5,150. 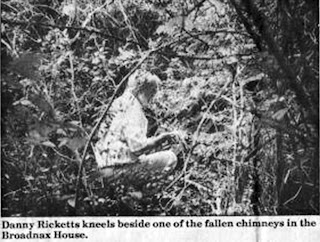 When Patton sold or to whom is unclear. However, the next owner appears to be Francis Williams. Williams sold the property to John W. Broadnax Oct. 17, 1843. By now, the acreage had grown to 1,050 acres through purchases of surrounding property.

However, walk farther down what probably used to be an old carriage road, and two rows of boxwoods seem to appear out of nowhere. Follow the 10-foot high shrubs, and there stands what's left of the old Broadnax House, built well before 1800, according to courthouse records.

A pile of old chimney bricks greets visitors to the spot. The growth of the woods seems to stand guard over the fallen buildings that were probably used to cure tobacco -- or hams -- during those days. The stones look like they were placed there just a few days ago.

It would be easy to fall into one of the numerous wells found on the property. Danny advises me to watch where I walk. To make his point, Danny dropped a stone down one of the walls we approached. The fresh cool water seemed deeper that the slope going to North Main Hill. I paid more attention from then on. 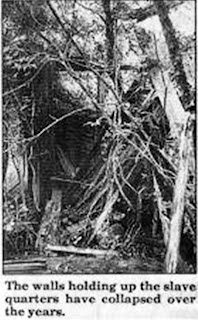 Walking around the complex, Danny appoints out a swarm of periwinkle on the ground beneath some pine trees. Historical buffs say that periwinkle is usually a sign of an old cemetery in the vicinity. However, a close examination provides no proof of headstones or grave markers. Just a lot of periwinkle.

Another smaller house is located down from the main building. The briars aren't as bad, but its snakier-looking. This structure was probably built later than the main house. More of the house boards are intact. The ever-present chimney looks like it did more cooking than the other home. The inside of the house is filled with strewn boards and other equipment. Similar to the main house old pieces of lumber are numbered. Danny said that was a technique used to make construction easier.

Danny said no one has lived in the house for at least 30 or 40 years. The last known occupants were two elderly bachelors who raised chickens and kept their doors open year-round.1

A few days later, Danny comes into the office to share more information he has gathered about the family. Any additional information will help make the story interesting, so we discuss his latest find.

While Danny is telling me about the lineage of the families who owned the property, I notice a name listed on one of his folders. Rene LaForce, my fifth great-grandfather, had a daughter named Judith. It appears Judith married a man named Robert Burton. The Burtons had a daughter, Mary. Mary married Thomas Fearn who lived at the home.

Judith came to live with Mary here. About 1820, Judith died at about age 90. Any distant cousins out there? Call me at the newspaper, extension 3088.

I'm not making a claim on the property, it's just interesting to see where your ancestors were living about 200 years ago.

During the celebration of Danville's 200th birthday, we should not forget the homes where no one lives. These structures are a symbol of this community's heritage that have almost been erased by time.
_______________

1Those two old bachelors were Edmund Richardson Walters (1873-1958) and Azariah Graves Walters (1871-1961). Technically Azariah was not a bachelor having once been married. Both lived well into their eighties. Grandsons of Captain Azariah Graves Walters (1810-1899), they owned the property where the house was located. Their father is Archibald Edmund Walters (1842-1919). My father remembers them living there. He also remembers the Catholic School. They lived most of their lives in Rockingham County, North Carolina. Azariah came to Caswell County later in life to operate the Walters Mill. Azariah Graves Walters died in 1961 at the age of 89, Edmund Richardson Walters died a few years earlier. Both are buried in Rockingham County, North Carolina (Greenview Cemetery). I don't know who inherited the property. They outlived their other siblings. Neither had children, nor did they have any nieces or nephews. Azariah's property in Rockingham County known as Irvin Heights was inherited by his numerous cousins. He apparently died without a will. The same probably applied to his property in Caswell County, North Carolina, and Pittsylvania County, Virginia. Source: Charles Sidney Walters III Email 3 February 2012.
Posted by RSF at 1:16 AM