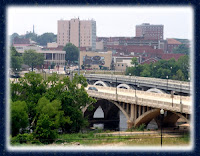 As if the place just grew, like Harriet Beecher Stowe's Topsy, the origins of Danville are frustratingly vague because its first settlers did not keep written records of life on the south side of the Dan. It is known from early land records that the first man to ask the Commonwealth for land of his own within what has become the City of Danville was William Wynne, a justice of Brunswick County. He received 200 acres on the south side of the Dan in 1738, at which time Danville, Pittsylvania County and all the land around them in Virginia were a part of Brunswick. Later he moved his family to this area and settled at the falls on the river.

The rush of water at that place became known as Wynne's Falls (or Ford), the original name of Danville. This ford, down river from the falls, was the shallowest spot on the Dan in this area. In an age before bridges, it was a natural place for people to cross over and, if they liked the spot, to settle.

But before Danville became a town of settled homes and businesses, it was a recreation area. People came to the shallows on the Dan to fish, as they still do today. Dr. George W. Dame, one of Danville's earliest educators and founder of the Episcopal Church of the Epiphany, described this recreational enterprise in his "Notes on the Origin of Danville." He wrote, ". . . some years after the close of the Revolutionary War, many of these gentlemen who had become impoverished by that War, in the Eastern part of the State, moved into this then very thinly settled part of the country to begin life again. "To keep up their acquaintance and talk over the past, they agreed to meet at Wynne's Falls annually, at the fishing season, and enjoy themselves. The fish chiefly sought was the sturgeon, which then abounded in the Dan River." These people vacationed in tents along the river, Dame claimed, because there were no houses south of the Dan at that time.

That situation changed when John Barnett, Danville's second permanent settler known by name, moved here to operate a ferry on the river in the late 18th century. According to Dame, Barnett also "had a line of bateaux (flat-bottom boats) put on the river for trading purposes" and the increasing river traffic determined that Danville would become more than a favorite fishing spot for the new settlers from eastern Virginia. On Nov. 23, 1793, the Virginia Legislature directed that 25 acres of Barnett's land be vested in 12 men who would lay it off into half-acre lots and establish streets. The new town would be called Danville, or village on the Dan.

Many of their descendants have been prominent Danvillians, instrumental in Danville's later progress. Of the 12 names, seven survive as appellations for streets in the city. Following the legislature's directive, it took nearly two years for sale of the lots to be accomplished. Although Edward Pollock in his "Sketch Book of Danville" claims that a grocery store-tavern-blacksmith's shop was the first edifice erected on this side of the river, the sale of Barnett's lots provides the first documented evidence that structures definitely were to be built. Barnett, later a postmaster here, obviously took land during the sale. Other original landowners, in addition to the founders, included James Colquhoun and Halcourt Townes. They settled on what have become Main and Craghead streets. There were enough citizens in the fledgling town in 1797 to sustain a post office and Danville's first postmaster, Charles Hoyle.

The town grew slowly during the early 19th century. One by one, homes crept up Main Street. Shops were opened and warehouses built on Craghead. In 1820, the Roanoke Sentinel became the town's first newspaper. It folded fast, to be replaced in 1822 by The Telegraph. The Danville Male Academy was opened, followed by the Danville Female Academy. In a grove of trees near the male academy, a cemetery was established. Now called Grove Street Cemetery, in the early 19th century the burial ground was situated on the extreme western edge of town. Beside Dames notes on Danville's early history, which were penned nearly a century after the town's founding, there is only one good source which describes the youthful village built on the banks of the Dan. Thompson Coleman, postmaster of the town from 1831 to 1853, arrived in Danville in 1829. Years later, he carefully described the place as he found it that year. His account is quoted in part below:

When I came to Danville to reside there, in 1829,I approached the place, then a mere struggling village, by way of the country road leading north, towards Pittsylvania Court House (Chatham). The road was a common country road, unimproved by grading or otherwise, narrow and often impassable in winter because of the sticky red mud, into which vehicles sank to the hubs. The country on the north side of the river, opposite Danville (now occupied by the town of North Danville

The bridge was an old-fashioned structure of heavy girders, twelve to fourteen inches square, laid at length from pillar to pillar - the pillars being pens of logs in the bed of the river, filled in with loose stones. (Coleman then explains that between the river and the canal, which had been cut around the falls to carry river traffic, were situated several milling operations, including flour, saw, corn and linseed-oil mills.) Passing from the toll bridge, the canal was crossed by a small frail bridge, built of hewn togs laid from bank to bank and covered with two-inch boards: and then the road took the name of Main Street, made a sharp turn to the right, and led up the hill and out of the town to a point a mile from the bridge, where it forked - one branch leading south into Caswell County, N.C., and the other west, and known as the Salisbury, N.C. road. (Coleman continues by naming the 55 structures he remembered as being the total number of buildings existing in Danville at the time.) Forty-five residences, business houses and warehouses stood on Main Street, which was a dirt road without sidewalks. It stopped in the vicinity of Grove Street Cemetery. In addition, there were four buildings on Bridge Street and three on Craghead and three others scattered near the river east of there.

The business of the town was small. There were only two regular stores, the most extensive of which was kept by Thomas and Samuel D. Rawlings, and the other by John Ross & Co. (Wilson and Baskerville and Ross, Lansdown & Co. have just gone into liquidation.) There was an agency of the Farmer's Bank of Virginia with a very small capital, managed by Seymour Scott and John W. Chew, as officers, and a board of directors. There were two tailor's shops, one blacksmith's shop and one shoemaker's shop (Captain John Noble's). There was one tan-yard (Linn's) operated by Samuel Patton, a brother of Dr. James D. Patton. Hats were manufactured on a small scale by Gilmore & Lyon. The trade of the place was in general merchandise, like that of the country stores of the present period, and was mostly carried on by barter for country produce, including whiskey and bacon, which were the staples of this section of the country at this time.

The tobacco trade was in its infancy, and was carried on by Thomas and Samuel D. Rawling and John B. Roy (who may be called the pioneers of the trade here). It amounted to about 350 hogsheads per annum. No leaf tobacco was sold loose, but all was prized in hogsheads, which were inspected by State Inspectors and sold at the warehouses; though the greater part of it was purchased from the planters at their barns, then prized and delivered at the warehouses. There was scarcely any tobacco manufactured here at all, but there was one small establishment conducted by Captain Wm. Linn and Wm. Chandler, who were the "Pioneer Manufacturers" of Danville.

There was one newspaper, The Telegraph, published weekly by Colonel Thomas H. Clark. There was no church in the town, and but little preaching. Occasionally there was preaching at some private residence, and sometimes at the "Yellow House" or the Male Academy, managed by a board of trustees, with Robert B. Gilliam at that time principal of the school; there were also two mixed schools for girls and boys, one of which was conducted by James Aiken and the other by Robert White. Such was Danville in 1829.