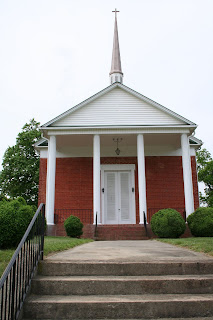 The Rev. Dr. Robert S. Ledbetter of Murrells Inlet, SC, will be guest preacher at a Homecoming service at Yanceyville Presbyterian Church on Sunday, September 30, 2007, at 10:30 AM. His sermon is entitled The Ponce de Leon Anxiety. the same sermon he preached on his first Sunday in Yanceyville in 1966. His wife, Julia K. Ledbetter, will be soloist at the service. Members, former members, and friends are invited to the gathering at Yanceyville Presbyterian. A luncheon will be served in Bason Fellowship Hall following the worship service which begins at 10:30 am. For additional information, phone 694-4145.

Dr. Ledbetter served as pastor of the Yanceyville Church from September, 1966 through September, 1971. Since leaving Yanceyville he has been pastor in Norfolk, Va., and Metairie, La. Since 1990 he has served in interim positions in 13 churches. He is now pastor of the Friendfield Presbyterian Church in Georgetown, SC.

Organized in 1838, the Yanceyville Presbyterian Church was the first church organized in Yanceyville. The original church was located on Wall Street one block from the present location. The first services in the present building were held in 1850 during the pastorate of Rev. John S. Grasty. The building has been meticulously maintained across the decades. Rev. Grasty’s diary contains details of the construction of the new church, and social life in Yanceyville including accounts of balls in Clarendon Hall (now the home of Ben and Margaret Williams), home of the Johnston Family, leaders in the Presbyterian Church.

Architect for the new building was Dr. Roan, Clerk of the Session in the church, and a beloved physician in the area whose home on East Main Street is part of the Yanceyville Historic District. Bricks for the church were made by slaves on Dr. Roan’s plantation. Dr. Roan’s personal collection of Thomas Day furniture is well know today and is owned by his great-grandson, Dr. Ed Hardy of Danville. It is believed that some of the pulpit furniture still in use and the original pews (several of which are still in the church) were also made by Thomas Day. The church's membership has never been large, but the faithful stewardship of its members and leaders have enabled its ministry to reach out within the community and around the world.

Oakview Presbyterian Church south of Yanceyville began as a chapel and Sunday School sponsored by the church and led by Mr. C. D. Covington and Mrs. Mary Oliver Kerr. Many members have served on boards and committees of Orange Presbytery and now Salem Presbytery. Both home and global missions have been supported over the years. In 2005 the church was recognized by Salem Presbytery for having missions of all the 151 churches in the presbytery. Caswell Parish has been the primary home mission ministry of the church from the beginning of the parish and continues to be. Beyond the regular benevolent giving for missions, the church has strongly supported Pennies for Hunger, a ministry that provides crisis support and long-term efforts to alleviate the root causes of hunger at home and abroad. Beginning in 2006 the church provides food for a dozen homeless orphans in North Korea. 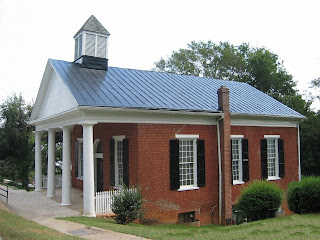 Milton Presbyterian Church is the “mother church” of Yanceyville Presbyterian Church. Rev. Nehemiah Henry Hardy was the organizing pastor. Rev. Hardy grew up in Maine and went to sea as a young man. The vessel on which he served was caught in a terrible storm off Cape Hatteras while the captain was quote inebriated. Nehemiah Hardy took command of the ship and promised God that if he would guide him through the storm to survival, he would serve Him faithfully wherever He led for the rest of his life. After the storm he left the ship in New Bern, NC, made his way to Princeton Seminary in New Jersey where he earned a degree in theology and came to North Carolina where he served several churches in the North Central Piedmont before his call to Milton.

Source and date unknown.
Posted by RSF at 2:31 PM