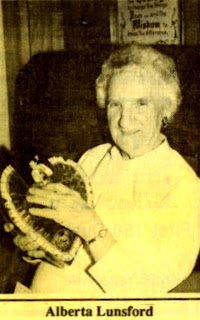 Love cures people--both the ones who give it and the ones who receive it. February 14, marks a day for expressing one's love for one another. A day for giving cards, candy, and memorable moments. Alberta "Bert" Lunsford and William "Bill" Satterwhite have chosen this special day, like many do, to exchange wedding vows. What makes them special you ask? Well, Bert is 83 and Bill is 78. Yes, it's a love story. You could even find it in True Romance.

Bert married Gilbert Lunsford when she was sixteen. They had four daughters and one son, and lived happily in the Leasburg Community for 56 years. During this time their children grew, married, moved, and had children of their own (and their children had children). Gilbert died, leaving Bert to carry on with her life.

Bill married Louise, Bert's niece, and they had a wonderful life together for 36 years in McLean, Virginia. As they grew older, Louise's health began failing, and Bill cared for her until her death. They had no children. After Louise died, Bill decided to visit Bert in Leasburg. While he was there he told her of a secret he had kept for 35 years. Bill said, "I've always loved you. I've loved you since the first time I saw you." After all of these years he never told anyone because he was married and because Bert was married and had children.

Then Bill popped the big question, "Bert would you consider marrying me?" Bert said, "Well I didn't know what to say. I was just shocked so I said, I don't know. Bill, you couldn't live with me. I have been living by myself for eleven years and doing just what I want to do and I'm so set in my ways. You would never be able to live with me." He said, "Well, I'd certainly like to try."

Bert tried to talk Bill out of his proposal. She explained she had always lived in the house she was in and she didn't want to move. He told her she didn't have to, he would sell his home and move from Virginia. She told him she had been a Lunsford for over sixty years. She said, "I like the name Lunsford and I'm not about to change my name." Bill said, "You wouldn't have to change your name. A lot of people keep their name when they marry."

Bert tried to discourage Bill in every way she could think of. She told him she was very active in her church, Union United Methodist. She has lots of friends and is involved in Ruritanettes. Bill's reaction was, "That's alright, I'll be here waiting for you when you get home." Bert asked Bill what he hoped to get out of this marriage? His response was, "Love. I want to take care of you the rest of your life or my life, which ever comes first." Bert said, "But Bill, I'm an old woman." He said, "Whether we live together a month, a year, five years, or ten years, it would be worth every minute of it. After all of these years we can be together. Please say yes."

The two made a trip to Ben David's Jewelers in Danville and Bill picked out an exquisite one-carat solitaire diamond for Bert. She said, "He told me he wanted to get the wedding bands while we were there so I wouldn't back out." The only problem Bert sees is the fact that she will lose "her space" that she has had for eleven years; for eleven years it's just been her and Mr. Cat.

Bert's children are very happy about the marriage; they have done most of the planning. Bert's daughter, Connie said, "I live in California and every time I'd call Mother and if she didn't answer I'd start worrying and wondering if she had fallen. Now, I can rest."

Eighty-three-year-old Bert giggles and says, "Well, we're going to get married this Sunday at 12 o'clock Noon at Union United Methodist Church and we're driving to Florida for our honeymoon."

There are no guarantees in the world whether you marry at eighteen or eighty. Marriage must be a ceremony of the heart.
Posted by RSF at 2:00 AM