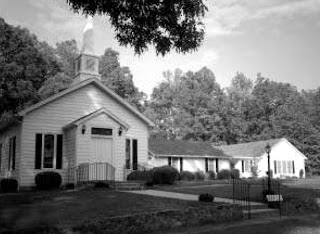 Locust Hill United Methodist Church is celebrating its 125th anniversary this year. Mrs. Lelia Williamson, a charter member, wrote a history for The Caswell Messenger in 1935:

Rev. Rowe was a Methodist circuit rider who, after the death of his wife, decided to go back to is native home in Missouri. He left a deed to Dr. James Williamson for one acre of land, which he owned near the Bethesda Presbyterian Church (at the time called Jack’s Fork) to be used as a site upon which to build a Methodist church. In 1884, a group of Methodists living in Locust Hill, to whom the property was given, decided this was not the proper location for a church. After cutting off the timber on the land, they sold the lot to Stephen Siddle for $100. This money was used to buy materials for the new Locust Hill Church. Sunday School was then being held in the old Stephen Neal storehouse, which was owned by J. B. Worsham (and later by Herbert White in 1946). There was a large oak tree under which an arbor was erected, and slabs brought in to make seats.

Rev. V. A. Sharp, pastor of the Yanceyville Circuit, conducted a meeting, during which it was decided to erect a church. Sharp preached until the church was completed. Dr. Grandison gave the present site, but failed to present the title before his death. Mr. and Mrs. Charles J. Yarbrough later came into possession of the property, and gave the Methodists a deed for three acres. Aurelius Turner gave some poplar trees to make into seats, but they were so large they had to be quartered to fit into the mill. These benches were later sold, and replaced with new ones from Snow Lumber Co. in High Point. The Turners, Worshams, Williamsons, and Graves contributed money, labor and material. Billy Fitzgerald, Wess Piper, Dick Blackwell, and William Reagan were the carpenters who erected the building, but it was several years later before the inside was completed. On Dec. 6, 1887, Rev. L. E. Thompson was sent as pastor to the Yanceyville Charge, and became the first pastor of Locust Hill Methodist Episcopal Church South. Locust Hill was for many years on the Yanceyville Circuit, with ministers serving five churches, Bethel, Locust Hill, Shady Grove, Prospect, and Yanceyville.

In 1884, a group of Methodists in the Locust Hill community came together and organized a Sunday School which was first held in the old Stephen Neal store building. Later, when weather permitted, the Sunday School was held under an arbor erected under a beautiful oak tree where the church now stands. During the year 1886, these same devout Christians organized and built what is now the Locust Hill United Methodist Church. Members and friends gave the land, trees for lumber, money, and labor to erect the building. The stained glass memorial windows, which remain in the church today, were contributed by descendants and loved ones of the early faithful members. It is believed that there were fewer than twenty charter members. In December 1887, Locust Hill Methodist Church received its first pastor, Reverend L. E. Thompson. At that time, the church was part of the Yanceyville Charge.

Church members participate in the spring and fall stews, staying up through the night stirring the stew, making fried pies, and other baked goods to raise money for the building fund. The church also maintains a booth of baked goods at the yearly Bright Leaf Hoedown in Yanceyville to raise funds for the church. The church especially enjoys the fellowship of its members and friends at their monthly Sunday night suppers.

The present minister of Locust Hill United Methodist Church is Reverend Rufus Butner III. He came to our charge in 1993. He is pastor to many of the descendants of the charter members. There is some question about the names of the charter members of the church, that is those who were members during the year 1887 when the church was organized and Reverend L. E. Thompson was the minister. Mrs. Lelia Williamson stated in her history of the church that there were fewer than twenty members: