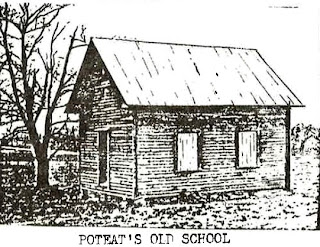 Located a little way off the County Home Road near the junction with the Hamer Road (Slade Road), Poteat's old field school is the only one-room public schoolhouse in the vicinity of Yanceyville available for preservation. It is one of the last of the breed left in the County. Currently, the Caswell County Historical Association has plans for the moving and restoration of this old house, relocation to be in the Yanceyville Historic District at the rear of the Old Courthouse. Contributions were being received at the Old Jail Restoration on Hoedown Days with a good response. Enough more dollars contributed between now and the next Hoedown might see another visitor attraction added.

Many Caswell citizens began their education at one of several small neighborhood schoolhouses scattered about the County, Poteat's being typical. When sufficient need arose, a small plot of land would he deeded to the County Board of Education for minimal consideration, the possession to revert to the grantor if the educational use should ever be discontinued. On the appointed day, prospective patrons and their helpers would gather at the site and put up a building in a surprisingly short time. The County would then contract and pay a teacher from some time in October until late February for the "free school." If the term should be extended, patrons paid the salary for the "subscription school." During the term the teacher would room and board in the community and probably walk, as did the students, sometimes up to three miles "'cross the creek, over the cow pasture and through the woods" as Mrs. Ernest Foster of Yanceyville Baptist Home recalls. The familiar "teacher load" was usually less than 40 -- not too bad even today or at least yesterday -- hut how about that number of all ages from 6 to 17 learning at all levels from Grade One through Grade Seven? And all in the same room? Heat was provided from a pot-bellied stove sitting in a sand box, according to Mrs. Foster, and water was obtained by dipping from a pail filled at the nearest spring.

About 1924, according to lifelong school-man M. Q. Plumblee, these little schools became consolidated and in 1926 came transportation by motor (these figures are approximate, he cautions, as some schools like Poteat's closed earlier and some closed later). The fact is that, surprisingly enough, the children did manage to get a fundamental education and some even managed to like it so much that they went on to higher schools and colleges. Education did take place in spite of frost-bitten fingers and toes, epidemics generated by the dipper-and-pail and, at Poteat's, Allen Slaughter (as we shall see).

Mrs. Inez Poteat Calvert of Danville, Va. is a granddaughter of the A. L. and Manerva Poteat who on April 30, 1913, deeded to T. J. Hatchett, R. I. Newman and L. A. Gwyn, who composed the County Board of Education one acre of land, more or less, in return for the sum of $5.00. The acre (it was actually 300 by 300 and quite a hit over) adjoined J. C. Smith and was 46 yards east of "the Montgomery Road leading from Yanceyville to Blanche." We must explain that the County Home Road as it now exists was constructed for the most part on the road bed of the former Montgomery's Mill Road, an ancient landmark in the County. After passing J. C. Smith's to the eastward, the old road had departed from the present highway and gone by Gillespie's Old Log School on Lipscomb Land. Thence it headed northward to the Mill and Blanche.

Bella Poteat Foster says she doesn't know why the Gillespie school was discontinued but it was where she went the first year. Miss Gertie Jones of Yanceyville remembers that when she was six around the turn of the century she went to Gillespie's and thinks there got to be more families living toward Yanceyville and that the New Hope School took over those to the east. Bella says her father gave the timber for the building described in Caswell's Architectural Inventory as "Small, gable-front building with overhanging eaves, single front panelled door. Originally served as a one room school."

The teacher for that year was Miss Bera Motley who received $35 per month, records Mrs. Calvert, and supplies for the year were bought, presumably by the County, as follows: 18 new patent desks (Bella says they were double); 5 window shades , 1 water bucket, 1 dipper, 1 wash pan, 1 blackboard, 1 box of crayons, 2 brooms, 1 large oak table, 2 lots of library books, 1 bookcase. It was noted also that school yards were cleaned off and eight maple trees planted. This information was on the second page of the report required of the teachers at the end of the year.

The first sheet of the teacher's report directed that the teacher should record efforts to beautify the school grounds, secure a library and pictures for schoolroom decoration under the printed heading "History." Miss Motley did indeed make history with the following summary:

Poteat's school house built 1913, school term begun October 6, 1913 with Miss Bera Motley for teacher. Friday night before Christmas the school gave an entertainment Box Party and Xmas tree. From the Box Party we realized the sum of $19.50 which went for securing a library for the school. School term ended March 18, 1914 with an entertainment the following night. "Our Awful Aunt" was presented which was a comic drama in 2 acts and 10 characters. Supt. Geo. A. Anderson of Yanceyville and Prof. E. T. Hines of the Faculty of the Yanceyville Graded School were present and made a splendid address.

Another such "History" obtained by Mrs. Calvert is for a later year with a different teacher who wrote:

"The Poteat School opened Oct. 2, 1916 with (Miss) Maggie McGuire teacher and with an enrollment of 34 pupils. On the night of Dec. 20 a play was given by the advanced students, entitled "The Little School Ma'am." At the close of the program a number of boxes were sold realizing a sum of $10.00, which was used for the purchase of a broom, dipper, and a teacher's chair and table. During the fall term the students sold 30 buttons, for which they received a flag for the school. On the night of Feb. 8, 1917 a debate was given and at the close of the debate, a number of pies were sold, realizing the sum of $10.20, which was used for the purpose of painting school building. Free school closed Feb. 29, 1917. Then a month of subscription school was taught, which closed Mar 29, 1917."

Mrs. Foster noes not remember exactly when Poteat's School closed; it may have been in 1921. She remembered Misses Motley and McGuire and of course her sister Fannie; also Fannie Sue Wilson and Fannie Woods; she mentioned Edna McGuire, Maggie's sister, and recommended that we go to see Mr. Louie Slaughter on the County Home Road. 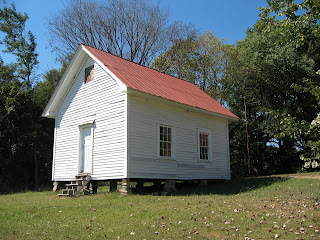 Indeed Mr. Slaughter did remember Miss Edna; his daughter was there that afternoon and said Mr. Louie still had the fountain pen Miss Edna presented to him at the end of the year for good behavior and scholarship. Louie's younger brothers Allen and John attended some time during the six or seven years the school was held. Mr. Slaughter told about the walks to and from the schoolhouse, building the fires, etc., and cleaning off the vines that always wanted to grow over the windows of the little building. He also told about the summer of 1914 when it was almost as dry if not more so than the summer of 1986. They didn't make any tobacco that year and if it hadn't been for the cow and the chickens and hogs people would have starved but somehow they got through it. He remembered many of the names mentioned by Bel1a; he had married one of his schoolmates, Vera Smith. It was always a time of reminiscing when any of the old students got together.

In fact, Holland Phillips who lives over in Burlington never saw him but that he brought it up about how he owed his education to Allen Slaughter. Mr. Louie continued: "He comes up with this straight face and says how the only reason he was able to drag himself out of the bed every morning and walk up to that school in spite of the way he hated it was he just had to be there to see what Allen was going to do that day!"

When pressed for details, however, Mr. Slaughter couldn't remember anything definite. Maybe his memory will come back when he enters the restored Poteat's School come next Hoedown.

Mentioned in the Article:

After over a hundred years without electricity, Caswell County’s one-room Poteat School is now retrofitted with electrical lights and power outlets, thanks to local volunteer support. “The challenge was to find the help and resources needed to get this done,” said Wally Ewalt, restoration project manager and Poteat School curator. “But just like how we have so much interesting history here in Caswell County, we likewise have a great number of businesses and
individuals who want to assist in these kinds of projects.”

Relocated to the Yanceyville Historic District, behind the courthouse, from its original location at the junction of Slade Road and County Home Road in the mid 1980s, Ewalt has taken charge of the building’s care for nearly 20 years. The newly added electricity may attract visitors, he said. “Now, whenever anyone wants to tour the schoolhouse, we have lights and can even run a fan to help cool, if necessary,” said Ewalt. According Ewalt, to accomplish any kind of improvement, it was necessary to run about 300 feet of electrical cords from an existing panel to across the parking lot to power what was being used at the school.

“The schoolhouse wasn’t built to be electrified. It never had it before,” he said. Donald Nickles was the first of many to step forward to volunteer time and supplies, he said. “Our next challenge was to find someone who had a trenching machine that would volunteer to dig
the almost 300 foot trench to bury the underground wire. That’s when Mark and John Thomas of
Thomas Brothers oil and Gas stepped forward,” said Ewalt.

It took Ricky Frances and Jayson Talbots of Thomas Brothers Oil and Gas several hours to get the trench dug; the wire run; and ditch covered. Tim Scruggs, who according to Ewalt has been a fixture in Caswell County for many years as an electrical-work problem solver, agreed to wire the school. Craig Smith and Scruggs’ son Adam finished the job the same day, he said. “After starting the project around 7 a.m., a flick of the new breaker came on the lights with the receptacle testing 100-percent at a little passed 3 p.m.,” he said. The project took only a day, with a few more days of cleaning and decorating, he said.

“It’s how things get done – People volunteering their equipment and time and working together in the community to make us proud to live in Caswell County. In the end, it was a fun day and a very worthwhile endeavor,” said Ewalt.

The Poteat School was first built in the early 1900s. A sidewalk winds around the old jailhouse to the school.