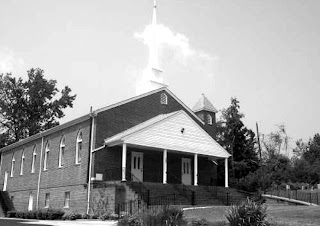 The following is from In the Beginning . . . The Churches of Caswell County, Jean B. Scott, Compiler (2000), and authored by Katie Lipscomb Williams and Elaine Jefferies Cunningham (December 1997):

In the year of 1870 under a big oak tree a small group of concerned and devout Christian men and women based the beginning of the Hamer Missionary Baptist Church. 1870-1881 has been characterized as a sluggish period in Caswell County's history, so it was not until 1881 that the first church was actually organized and built of logs. It was known as the Hames Chapel Baptist Church.


Hames Chapel Baptist Church, as it was then called, acquired the name from Thomas Hames, a black blacksmith of this community. The land for this structure (1.5 acres) was purchased from Mr. Thomas Hames and his wife, Lucrecia. The organizers were Brothers James Jeffries, Nelson Moore, Anderson Long, Louis Lea, John Lea, and West Lea. The land purchase amount was $30. Later it was called the Hamer Missionary Baptist Church.

A board of "trustees" was formed in 1913 consisting of Brothers Anderson Slade, James Saunders, and Nelson Moore. In March 1913, a second tract of land of 1.5 acres was purchased from Cornelia F. Hubbard for $40.

The log church was replaced with a wooden frame structure on November 26, 1934, on the third tract of land purchased from Mrs. Ola D. Giles for $70.50 by Brothers James Jefferies, Jr., Spencer Jeffries, Sr., and James Saunders.

The most outstanding mark of the "Age of Progress" in the Hamer Community was the investment in a new church building. The old frame structure had served the community long and well, but the congregation had outgrown this building, and the new prosperous years called for a more keeping of the times. In 1949, the third and present church was constructed of brick. On March 14, 1952, the fourth tract of land, 1.6 acres, was purchased from Mrs. Ola D. Giles for $300. The trustees were Brother Charlie Saunders, James Jeffers, Sr., Spencer Jefferies, Sr., and Jimmy Williamson.

The spacious church today is a living witness to the love and loyalty with which people of the community have supported their church throughout the centuries. Many renovations have been done over the years. We now have memorial plaque stained glass windows, with beautiful mosaic religious symbols. The walls are beautiful panel, floors and pews luxuriously carpeted to give comfort and beauty. The church steeple stands high and enclosed is a bell that is rung only on special occasions. Classrooms, bathrooms, modern kitchen, handicapped ramp, paved parking lot, beautiful ceiling with chandeliers, a baptistry pool are among the many additions made as the years and times have changed. We now have central heating and air-conditioning, replacing the "pot belly stove" in the frame structure. The wood was given by Brother James Jefferies on a monthly basis.