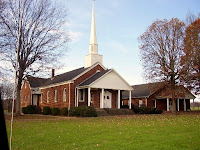 Concord Congregational Christian Church in the southwestern part of the county near Milesville was established in 1814 perhaps by the Rev. Benjamin Rainey. On December 15, 1814, Abraham Simmons and Elisha Barton deeded an acre and a half to the church for the modest sum of one-quarter of a dollar. The first church, a log structure, had one room in the shape of a cross with twelve corners; one section was reserved for blacks. Among the family names represented in the records for 1842 are: Williamson, Barton, Donoho, Miles, Anderson, Terrell, Walker, Pinnix, Saunders, Rudd, Simmons, Garrison, and Turner. The second church was erected in 1883, while the present attractive brick structure was occupied first on June 25, 1955.
_______________

Despite an Elon address, Concord Christian Church is about 14 miles farther north — as the crow flies. The church is in Caswell County, at 4904 Cherry Grove Road, between the communities of Cherry Grove and Milesville. And it’s been there for 200 years. Its anniversary celebration is Sunday.
The church was organized in 1814. That Dec. 15, Abraham Simmons and Elisha Barton, in exchange for a quarter, deeded an acre and a half to the trustees of the church and their successors.

The first building was a one-room log structure in the shape of a cross. It included a section for slaves: During that period, slaves and slave owners worshipped together. The roll book of 1842 shows 51 white members and 12 black members.

The second building, erected in 1883, was a one-room white frame structure. Three years later, a plot for the cemetery was surveyed.

The church had a close bond with the North Carolina and Virginia Conference, and it sent delegates and alternates to conference meetings each year. In 1904 and 1935, ministers and delegates met at Concord.

The church celebrated its 150th anniversary Oct. 25, 1964. At the close of the service, an offering was received to complete four additional Sunday school classrooms.

The church got its first Christmon tree in 1985, courtesy of the Women’s Fellowship.

In 1987, the Young Adult Class put pew Bibles in the church, and pew cushions were purchased.

To celebrate the 175th anniversary, Dec. 17, 1989, members dressed to recall 1814 or later, and the Sunday school met in the sanctuary to recall Sunday school of years ago.

The last 20 years have been filled with activities and new outreach programs.

In 1997, the New Directions Class and Men’s Fellowship built a walking track for the church and the community. A picnic shelter and storage room were erected in 1998. In 1999, work on a new fellowship hall began. New benches for the front of the fellowship hall were donated last spring.

In 1998, the church voted to return to its original name to reflect its heritage. As of 2001, it’s no longer part of the United Church of Christ.

Friends and former members are invited to attend the 200th anniversary celebration Sunday. The 11 a.m. service will be followed by a picnic lunch at 12:30 p.m.

There will even be an appearance by James O’Kelly, founder of the denomination — courtesy of the Rev. Darryl R. Peebles of the historic Providence Christian Church in Graham, in costume.
Posted by RSF at 2:07 AM