The Boston Globe
A Story of Acquisition
By Sebastian Smee
Globe Staff/May 29, 2011 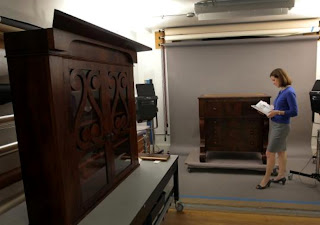 For many years, curators at the Museum of Fine Arts have been trying to get their hands on an excellent piece of furniture by Thomas Day. Day was a fascinating figure: a free African-American cabinetmaker who worked in North Carolina in the 1840s and ’50s. Besides being one of North Carolina’s most accomplished furniture craftsmen, he was a great entrepreneur. He trained both free and slave apprentices, and even hired slaves himself. “We’ve had him on our wish list forever,’’ said Kelly L’Ecuyer, an MFA curator of decorative arts and sculpture. The problem was that exceptional pieces by Day rarely come up for sale.

One such piece, a secretary in the empire style, was slated for sale at auction in New Orleans last year. L’Ecuyer and her colleagues were excited. But there was a catch: The auction was scheduled for Nov. 20. That was the day the Museum of Fine Arts’ new Art of the Americas Wing opened to the public. Amid the fanfare and celebrations — it was a free Community Day — all hands were needed on deck. Undeterred, the museum sent Christine Schaette, one of its furniture conservators, down to Louisiana to check out the piece shortly before the sale. And on Nov. 20, just as the new wing was being overrun by enthusiastic hordes, Gerry Ward, a senior curator of decorative arts and sculpture, made a successful phone bid. The Day piece, which is in conservation ahead of its eventual display, is a momentous addition to a collection that continues to grow at a terrific clip.
Posted by RSF at 5:59 PM