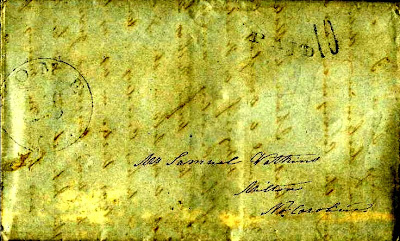 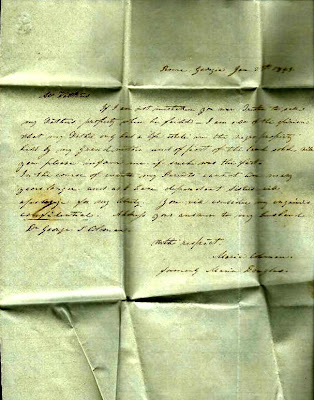 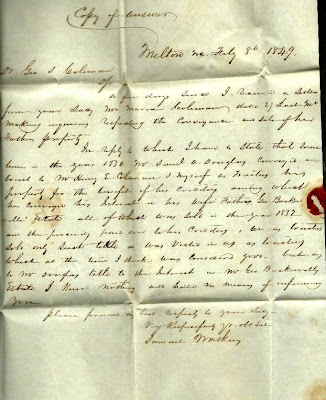 If I am not mistaken you were trustee to settle my father's property when he failed. I am also of the opinion that my father only had a life estate in the [negro] property held by my grandmother and of part of the land sold. Will you please inform me if such was the fact? In the course of _____ my parents cannot live many years longer and as I have dependent sisters _____ apologize for my liberty. You _____ consider my inquiries confidential. Although you _____ _____ to my husband Dr. George S. Coleman.

In reply to which I have to state that some time in the year 1830 Mr. Samuel A. Douglas conveyed in trust to Mr. Henry E. Coleman and myself as trustees his property for the benefit of his creditors among which he conveyed his interest in his wife's father's Geo. Baskerville in the estate all of which was sold in 1832 and the proceeds paid over to his creditors. We as trustees sold only such title as was visited in us as trustees which at the time I think was _____ and good. But as to Mr. Douglas title to the interest in Mr. Geo. Baskerville's estate I know nothing and have no means of informing you.

1849 Rome, GA Stampless Letter to Milton, NC
Origination Point: Rome, GA
Date: Feb. 20 (1849)
Description: Stampless folded letter with black CDS and PAID, 10, markings sent to Mr Samuel Watkins/Milton/No Carolina. Content: The content is divided into two parts: (1) Maria Coleman, previously known as Maria Douglas, questions Samuel Watkins (1800-1868) as to why "negro property" has not been included in the will of her father. This "property" was owned by her grandmother. She says to address the reply to her husband, Dr. George S. Coleman. 2) Samuel Watkins pens a copy of his reply. The property has been divested in 1832 to cover debts incurred by her father. This intent was conveyed by her father, Samuel Douglas, to Watkins and Henry E. Coleman in 1830. With this conveyance, they became trustees of the property. The property was turned over to George Baskerville in 1832 to satisfy the debt. Initially it was thought that this property was land. However, the back flap contains some very enlightening information that is noted in pencil: "4 Negros 1832/Baskerville estate." There are other notes on the back flap in pencil, but they are illegible.
_______________