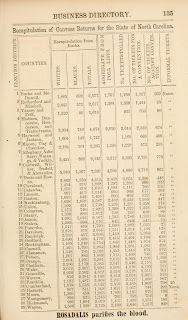 After the Civil War, William W. Holden headed the new North Carolina Republican Party, which included freedmen, carpetbaggers, and native whites. The Republicans controlled the state convention of 1868 that drafted a new constitution. They also controlled the new state government, and Holden was elected governor. During this period, North Carolina sent 13 African American delegates to the state constitutional convention in 1868. One was from Caswell County.

First, the issue of whether to hold a constitutional convention was put to a vote. Here are what may be the voting results from Caswell County, North Carolina:

The foregoing is a correct statement from the Returns of the election held on the 19th and 20th days of November last, in and for the State of North Carolina, made to these Headquarters by the canvassers, and from the returns made by the Boards of Registration for the several registration precincts of said State, it appears thereby that a majority of the votes given at the said election were "For a Convention;" and, also, that at such election a majority of all the registered voters of said State voted on the question of holding said Convention.

Thus, it appears that Caswell County voted overwhelmingly in favor of a constitutional convention. Caswell County delegates to this convention were Wilson Carey and Philip Hodnett. Note the following from When the Past Refused to Die: A History of Caswell County North Carolina 1777-1977, William S. Powell (1977) at 232:

"Although there were many native North Carolinians present at the constitutional convention there were also a number of black delegates and Carpetbaggers. Caswell was represented by Philip Hodnett, who had also represented the county in the House of Commons in 1865, and by Wilson Carey, a black. The cost of the convention to the taxpayers was reported to have been nearly $100,000; expense accounts were heavily padded and entertainment paid for by public funds was provided on a lavish scale. A bar was opened in the capitol. This was, however, merely the opening scene of what would prove to be an expensive and wasteful period in the state's history. Fraud and dishonesty were rampant. . . ."

It appears that in addition to a vote on whether there should be a convention, the voters also were asked to select representatives to attend the convention, which election was held 19 and 20 November 1867. Caswell County was designated as the 25th Electoral District, and following are the election results:

That a vote apparently was taken to determine whether a convention would be held is somewhat confusing. Under the Radical Construction laws adopted by Congress it appears that the former Confederate states were required to adopt a new constitution:

"At General Canby's direction, in compliance with the orders of Congress, an election was held in November 1867 to choose delegates to a constitutional convention. The vote for holding a convention was 93,000; it was opposed by 32,961, while 53,686 registered voters did not express themselves one way or the other."

That the North Carolina election results were reported to (and by) the Bureau of Civil Affairs in Charleston, South Carolina, probably resulted from the fact that North Carolina and South Carolina were combined into one district (the Second Military District) for purposes of military rule after the Civil War. The first District Commander was Major General Daniel E. Sickles, who was followed by General E. R. S. Canby.
_______________

NC Constitutional History, 1868-1875 by John L. Sanders, Director of the Institute of Government, University of North Carolina at Chapel Hill:

The Constitution of 1868 incorporated the 1776 Declaration of Rights into the Constitution as Article I and added several important guarantees. To the people was given the power to elect all significant state executive officers, all judges, and all county officials, as well as legislators. All property qualifications for voting and office holding were abolished. The plan of representation in the Senate was changed from a property to a popular basis, and the 1835 House apportionment plan was retained. Annual legislative sessions were restored.

The executive branch of government was strengthened by popular election for four-year terms of office and the Governor's powers were increased significantly. A simple and uniform court system was established with the jurisdiction of each court fixed in the Constitution. The distinctions between actions at law and suits in equity were abolished.

For the first time, detailed Constitutional provision was made for a system of taxation, and the powers of the General Assembly to levy taxes and to borrow money were limited. Homestead and personal property exemptions were granted. Free public schools were called for and the maintenance of penal and charitable institutions by the State was commanded. A uniform scheme of county and township government was prescribed.

The declared objective of the Conservative Party (under whose banner the older native political leaders grouped themselves) was to repeal the Constitution of 1868 at the earliest opportunity. When the Conservative Party gained control of the General Assembly in 1870, a proposal to call a convention of the people to revise the Constitution was submitted by the General Assembly to the voters and rejected in 1871 by a vote of 95,252 to 86,007.