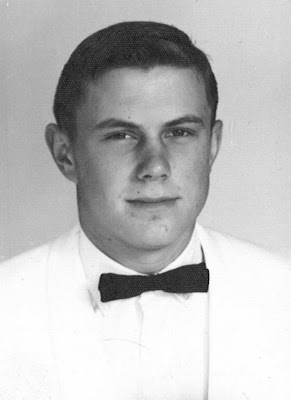 Julius Johnston III majored in political science at UNC-CH and was a member of Pi Kappa Alpha fraternity. He entered the Navy in October 1965 and volunteered for submarine duty after graduation from boot camp. He was a member of the crew of the ill-fated U.S. submarine Scorpion, which was officially declared lost at sea on June 5, 1968. His family is from Yanceyville, North Carolina, and Johnston graduated from Bartlett Yancey High School in that town.

USS Scorpion (SSN-589) was a Skipjack-class nuclear submarine of the United States Navy, and the sixth ship of the U.S. Navy to carry that name. Scorpion was declared lost on 5 June 1968, one of the few U.S. Navy submarines to be lost at sea while not at war and is one of only two nuclear submarines the U.S. Navy has ever lost, the other being USS Thresher (SSN-593), which sank on 10 April 1963 off the coast of New England.
Posted by RSF at 3:53 PM