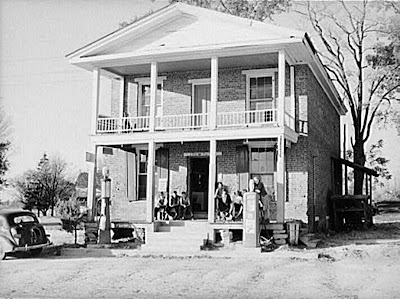 The post office at Prospect Hill, North Carolina, was established 15 August 1823. On the adjoining lot of the current post office is the building that housed it for more than one-hundred years, Warren's Store. Built in the 1850s, this old store building still has a corner set aside by Mrs. Geneva Warren that contains the Prospect Hill Postal Museum. In this fascinating corner are the old call letter boxes, letter scales, receipts, records, ancient postal manuals, and other post office memorabilia. One manual issued 1 April 1859 lists alphabetically every post office in operation that year along with the name of its postmaster. Another section of this manual lists every county of every state in the United States and gives the name of every post office located in each of the counties. Another portion of it has the postal rules and regulations in force at that time. Among the many interesting documents on display is a copy of a pardon given to Franklin Link Warren, postmaster 1842-1865. The pardon was for having operated the Prospect Hill Post Office under the Confederacy during the Civil War. [Note that the foregoing speaks as of 1985.]

Robert D. Satterfield, postmaster 1969-1988, related that his uncle B. C. Satterfield carried the mail by horse and buggy for more than thirty years. Irving Warren was also a rural carrier. James Rudolph Nelson resigned as postmaster in 1968 to take the rural carrier appointment and served until his retirement in 1978. At that time the Greensboro Sectional Center realigned some of the rural routes of its association offices. Since then most of Prospect Hill's rural route has been served by Charles N. Briggs, the rural carrier out of the Leasburg Post Office. The remainder is served by Eddie Jones, the rural carrier out of the Hurdle Mills Post Office. [Note that the foregoing speaks as of 1985.]

In 1975 a new modern brick post office was built and was occupied 29 December 1975. It stands at the corner of S.R. 1702, Ridgeville Road, and S.R. 1771, Main Street. Through every change of every administration when postmasters were changed by the Democratic or Republican part in power at the time, up through the permanent postmaster appointments of the present day, Robert D. Satterfield believes that Prospect Hill's Post Office has always been located on this same corner, although not always in the same building, since it was first established 15 August 1823.

Where no description is given of the office held it was postmaster.

The following is from the Raleigh News and Observer newspaper 10 November 1963:

Each morning, except on days of rain, sleet or snow, the postmistress or postmaster of the rural station raises the flag. Recently at the Prospect Hill post office the flag stood out briskly in the November wind. The post office is in a front corner of a general merchandise store which was built in 1857. Four or five senior citizens in their 80s sat around the store and discussed the tobacco market. James R. Nelson, who has been postmaster of the Prospect Hill post office since 1940, was sorting out the letters and magazines. "Yes, this post office was established in 1823," he said. "And my family has operated it over 100 years. My great-grandfather was made postmaster on November 25, 1842. Nelson's grandfather over the job in 1888 and ran it until 1940 when Nelson took charge.

Permalink
Posted by RSF at 7:18 PM