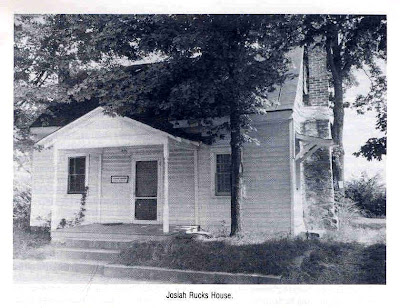 One of the oldest houses in Yanceyville, formerly hte law office of D. E. Scarborough, was built by Josiah Rucks. Mr. Rucks was born in Virginia in 1814 and was a resident of the town in the 1830's, 40's, 50's, and 60's. The 1850 census gives his occupation as coachmaker. Legend says he was the architect and may have been the contractor for the Kerr house and the Johnston (now Jones) house.

The Milton Chronicle in 1857 advertises "May, Rucks, and Lowns, coaches and harnesses made." In 1858 the firm was dissolved and Mr. Rucks evidently suffered financial reverses. He sold his home the same year to Dr. Bedford Brown who lived in the brick house next door, the deed indicating he was in debt to Dr. Brown. Other property he owned was sold at the same time. Also in the same year, he lost a son -- for buried in the Presbyterian Church cemetery is William Quinn Rucks, 1845-1858, son of Josiah and Sallie Rucks.

In the 1860 census, Mr. Rucks was listed as a hotel keeper with his wife, Sallie, as hostess. There were 23 guests at the hotel. It is unknown where the hotel was located. A daughter, Virginia, was married to R. C. Gilliam on November 30, 1863 by Jacob Doll, minister of the Presbyterian Church. After the War, he returned to Virginia.

In 1874 the Rucks house was sold along with the Brown house to John H. Kerr. It served as the post office when Mrs. E. Catherine Kerr was postmistress. Later it was used as a private school for the neighborhood children. It has also been a private residence and an office. The two rear rooms were added in the 1930's.