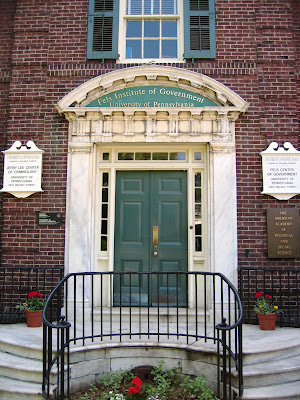 (The entrance to the Fels Institute of Government at the University of Pennsylvania.)
Click Photograph for a Larger Image

Note that the building that now houses the Fels Institute of Government was a one time the Fels mansion on the west end of the University of Pennsylvania campus.

Samuel Simeon Fels, the youngest son of Lazarus and Susanna Fels, was born in Yanceyville, N.C., on February 16, 1860. His family moved north to settle in Philadelphia, where in 1876 Samuel joined the soap manufacturing business established that year by his older brother. The firm, Fels & Co., was incorporated in 1914, and Samuel became its first president, holding the office until his death in 1950. (The company was sold to Purex Corporation in 1964.) While remaining active in the affairs of Fels & Co., he also became one of Philadelphia's most prominent philanthropists. He took an active interest in, and gave generous support to, civic, scientific, cultural, and educational causes. In 1936 Fels established the Samuel S. Fels Fund to continue financial support in these areas. The Fund is still active (2005) and provides support through endowment to numerous non-profit organizations in the Philadelphia area.

Fels-Naptha is a brand of bar laundry soap. It is manufactured by and is a trademark of the Dial Corporation. The soap comes packaged in paper, similar to bar body soap, and is most often found in the laundry section of a supermarket or grocery store. While sometimes also sold next to personal-care body soaps, however, it should not be used as a body soap since it is a skin and eye irritant. It is often used as a home remedy in the treatment of contact dermatitis caused by exposure to poison ivy, poison oak, and other skin-irritant plants. The soap is used for pre-treating stains on clothing by rubbing the soap onto the stained area. It can also be used to make homemade laundry soap that is much cheaper than many commercial laundry detergents. 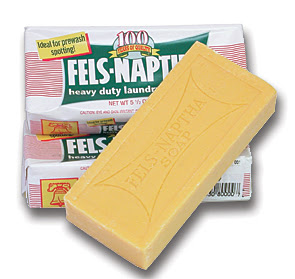 Fels-Naptha® is the golden bar with the clean naptha odor. Excellent for pre-treating greasy, oily stains like perspiration stains and ring-around-the collar. Fels-Naptha® has stood the test of time for over 100 years so you know it really works. Fels-Naptha® is a time-tested stain remover and pre-treater working especially well on oil-based stains. Just rub the stain with a wet bar of Fels-Naptha® Soap. Let it sit for a few minutes and wash as usual. Fels-Naptha® especially works great on stains made by: Chocolate, Perspiration Baby Formula & Make-up. Did You Know? Poison ivy resin can remain on your clothes for over 1 year. Washing with Fels-Naptha® will eliminate the dangerous resin from your clothing. Thoroughly wash all of your exposed clothing including hats, gloves, coats and pants in shaved or grated Fels-Naptha (about 1/16th of the bar). This will effectively remove the poison ivy resin and prevent further outbreak. No wonder millions of people for over 100 years have been saying, "Nothing can take the place of my Fels-Naptha!"

The following is from the History of the Fels Institute:

Samuel Simeon Fels was born on February 16, 1860, in Yanceyville, North Carolina to Lazarus and Susanna Freiburg Fels, German Jewish immigrants who had immigrated to the United States from Germany in 1848 to escape political repression.

In 1861, according to North Carolina and Fels family folklore, an odd series of events led to the establishment of the Fels family soap business. The story goes like this. The leading citizens of Yanceyville decided that a distillery was needed to spur the local economy. Much joy came to Yanceyville with the first batch of locally brewed whisky. The waste mash, however, not being fully cooked, killed a herd of swine that ate but could not digest it. The enterprising Lazarus Fels bought the carcasses, cooked the fat, and mixed it with lye to make a large batch of soap. He sold the soap to the Yanceyville General Store marking the start of the Fels family soap business.

The business fared poorly in the uncertain post-Civil War economy, and Lazarus and his brother Abraham moved the family first to Baltimore in the late 1860s, where they operated a retail soap outfit selling fancy toilet soaps, and then on to Philadelphia in 1873. In the late 1870s, the brothers purchased Philadelphia’s Worsley and Company soap manufacturers and renamed it Fels & Company.

Samuel Fels joined the company business after completing two years at Central High School in Philadelphia. He ultimately became president of the company and held this post throughout the remainder of his working life. Under his direction, the company grew and prospered. In 1893, the company acquired a process for adding naphtha, or benzene solvent, to laundry soap. The new product, “Fels-Naptha Soap,” possessed enhanced grease-cutting and cleansing properties. In addition, it served as a shampoo, a treatment for poison ivy, and a cure for dogwood tree borers. It soon made its way into nearly every household in American and rapidly became one of the most widely known products in the world. 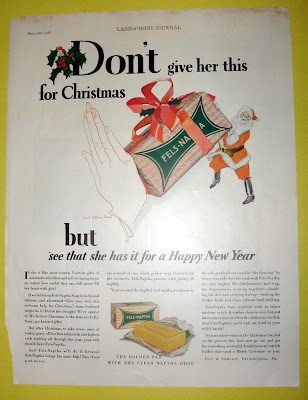 When The Procter & Gamble Co. celebrated its 100th birthday at this show in the Cincinnati Music Hall in 1937, the idea of washing your entire body with soap was younger than the Civil War. But P&G drafted its cavalry of cleansers for an even bigger battle — against the Colgate-Palmolive-Peet Co. and Lever Brothers. P&G and its two major competitors supplied 80 percent of the 3-billion pounds of soap Americans used every year. P&G’s Fels-Naptha targeted immigrants, while Camay rinsed rivals away with endorsements from leading skin experts. Ivory’s famous slogan, “99 and 44/100 pure,” helps the company clean up to this day, with $51 billion in 2004 sales. Source: Exhibitor Online

Permalink
Posted by RSF at 4:55 PM