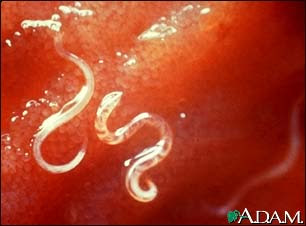 (Image courtesy of the Center for Disease Control and Prevention)

During the 1909-1914 period, The Rockefeller Sanitary Commission conducted in several southern states, including North Carolina, campaigns against the hookworm parasite. For an interesting description of the 1913 campaign in Caswell County go to Caswell County Hookworm Campaign. This is not a medical treatise, but a fascinating 1913 description of Milton and Yanceyville, with observations about Dr. Stephen Malloy and journalist Tom Henderson. Dr. Warren of Prospect Hill also is mentioned.

The Rockefeller Sanitary Commission for the Eradication of Hookworm Disease was organized on October 26, 1909, as a result of a gift of $1,000,000.00 from John D. Rockefeller, Sr. who hoped that a five-year campaign against the disease would lead to the "adoption of well-considered plans for a cooperative movement of the Medical Profession, Public Health Officials, Board of Trade, Churches, Schools, the Press, and other agencies." The gift was accepted on October 26, 1909, by William Welch, Simon Flexner, Charles W. Stiles, Edwin Alderman, David Houston, P. P. Claxton, J. Y. Joyner, Walter H. Page, H. B. Frissell, John D. Rockefeller, Jr., Frederick T. Gates, and Starr Murphy.

The bylaws use the wording of Rockefeller's letter of gift in their objectives towards the cure and prevention of hookworm disease. The eradication effort was to be a joint project between the states and the Sanitary Commission. The Commission was to furnish the initial impetus and to serve as an information agency for the states. It also paid the salaries of the field personnel. Offices were opened in Washington in January, 1910, and the business of organization began. The state was the basic unit of work and the state public health system was the main contact, though medical associations, public school systems, and the press were enlisted. Each state created a Director of Sanitation who was appointed jointly by the Sanitary Commission and the state public health authorities. The Director of Sanitation was a state official, responsible for directing and organizing the campaign in that state. Sanitary inspectors were under the province of the State Director of Sanitation. These, together with the microscopists, were the field staff. They surveyed the state to determine areas and degrees of infection, enlisted the aid of local community members in securing appropriations to add to those of the Sanitary Commission, worked with local physicians, gave treatment to the infected, inspected schools, and gave lectures and demonstrations to instruct people how to prevent reinfection and avoid soil pollution. This last effort of lectures and demonstrations included the press and the local educational systems, as well as all the community groups that could be interested in the project. Particular attention was paid to the instruction of school children. Education was considered as large a part of the campaign as was treatment. In 1910, Virginia, North Carolina, Georgia, South Carolina, Tennessee, Arkansas, Mississippi, Alabama, and Louisiana all began hookworm campaigns. By 1914, Kentucky and Texas had established their programs, and preliminary surveys had been taken in several other states. Dispensary work, instruction in medical and public schools, and intensive community work all increased public awareness of hookworm as a disease, and the possibility of its cure and prevention. The campaign ended formally in 1914, though some of the programs carried over until June, 1915.

Disease and Development: Evidence from Hookworm Eradication in the American South

The Germ of Laziness
Posted by RSF at 1:27 PM