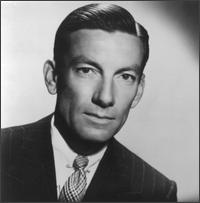 What connection could Hoagy Carmichael (1899-1981) possibly have to Caswell County, North Carolina? You might be surprised. Click on the photograph above for a larger image.

The following is based upon The Heritage of Caswell County, North Carolina, Jeannine D. Whitlow, Editor (1985) at 143 (Article #108 "The Duncan Carmichael Family" by John Wesley Carmichael), and official Carmichael Family websites. References are compiled at the end of this article.
_______________

Duncan Carmichael, Sr., was on the tax list in Cumberland Parish, Lunenerg County, Virginia, for the year 1764. Duncan Carmichael, Jr., was a Revolutionary War soldier. He enlisted in Caswell County on May 15, 1781, in Dixon's Company 10th Regiment in the Continental Line. He was a private and a blacksmith, and fought in the battle of 96 South Carolina and in the Battle of Eutah Spring's, South Carolina. He left the service on May 28, 1782.

Duncan Carmichael, Jr., drew a pension beginning October 1819 of eight dollars per month. His pension is listed in the National Archives at Washington, D.C. Having lost his discharge papers, he had trouble proving that he had been in the Revolutionary Army. Bartlett Yancey, a native son of Caswell County, a teacher, a lawyer, and a member of the U.S. House of Representatives, gave a sworn statement that neighbors where he grew up talked of Duncan Carmichael's Revolutionary Wary service and that he had no doubt it was true.

Duncan Carmichael, Jr.'s obituary was in the Western Carolinian (newspaper) published in Salisbury on August 2, 1834. He died at his home in Stokes County near Germanton, North Carolina, at the age of 82. He had a land grant in Caswell County in 1778 on the North Carolina-Virginia state line in the St. Lawrence District. He lived there and on the Hico River nearby until 1788 when he moved to the St. David's District in Caswell County (the Locust Hill Community). He lived there until 1812 when he moved to Stokes County, North Carolina (near Germanton).

Richard Carmichael and Mary Graves had a son named Peter Carmichael, who married Lydia Teague (also from Stokes County, North Carolina). In September 1829 a group of Carmichaels, Graves, Teagues, Holders,Volcks, and other related or unrelated families (Penningtons, Longs, Oliphants, Kirks and others) moved to Greene and Monroe Counties, Indiana. Richard Carmichael and wife Mary Graves settled in Greene County, Indiana. Richard was a hard-shelled Baptist and eventually was buried in Clinton, Indiana, (near Kokomo) at Veneman Cemetery and Mary was buried in Monroe County in Tague Cemetery. His son Peter had a meatpacking business and a partner (J. Urmey). Peter was the treasurer of his Mason's Lodge when he died. Both are buried at Clover Hill Cemetery, Monroe County, Indiana.

We are getting close.

Here is a simpler ancestral outline:

According to an article on page A24, The Wall Street Journal, Sept. 9, 1999, titled "Carmichael's Centenary Celebrations", by Tom Nolan:

"Seventy years ago, Hoagland Howard Carmichael, from Bloomington, Ind., found a melody that enchanted the world...The melody was titled 'Star Dust' (later 'Stardust'), and is arguably the most recorded popular song of all time, with well over 2,000 versions...Hoagy Carmichael, in a career that spanned two or three generations, wrote more than 600 other melodies, some nearly as well known as 'Stardust': 'Georgia on My Mind,' 'Skylark,' 'Up a Lazy River,' 'Rockin' Chair,' 'Baltimore Oriole,' 'Heart and Soul,' 'The Nearness of You.'...Hoagy Carmichael, with his low-key informality and his idiosyncratic vocal style, had success not only as a composer and a recording artist, but also as a film actor, radio and television performer, and memoir writer. But it was the songs this onetime lawyer and untrained musician wrote that mattered most to him..." 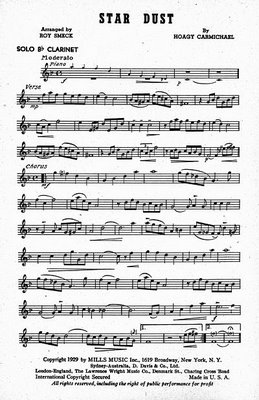 Star Dust by Hoagy Carmichael (1927) [click on the photograph for a larger image].

Of more than passing interest is the fact that one Mary Graves was the great great grandmother of Hoagy Carmichael. Mary Graves was the daughter of Peter Graves of Surry County, North Carolina, generally believed to be a direct descendant of Captain Thomas Graves of Virginia from whom the Graves family of Caswell County purportedly descend. For more go to the Graves Family Association Website. Note, however, that recent DNA studies have caused major shifts in the Captain Thomas Graves genealogies.
_______________