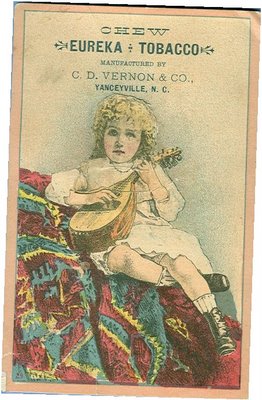 Note that the 1850 US Census for Yanceyville, Caswell County, North Carolina, listed a Calvin D. Vernon, born around 1818 in Virginia. He is the son of Ann Y. Vernon. No connection has been made with the C. D. Vernon of the above trade card.

C. D. Vernon also was appointed by the North Carolina legislature in 1877 to serve as an officer of the Yanceyville municipal government until an election could be held. Later, he was involved in unsuccessful efforts to secure a railroad to run between Danville, Virginia, and Yanceyville, North Carolina.