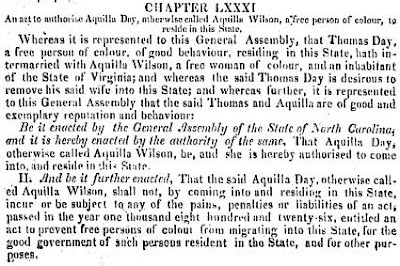 A Bill to Authorize Aquilla Day, A Free Person of Color to Reside in This State After Her Marriage to Thomas Day, the Furniture Maker from Milton, Caswell County, North Carolina, 23 December 1831. Location: North Carolina State Archives.

Abstract: Sixty-eight citizens of the town of Milton ask that Aquilla Wilson, a free woman of color of Halifax, Virginia, be exempted from an 1826 North Carolina law "entitled 'An act to prevent free persons of Colour from migrating into this state, for the good government of such persons resident in the State, and for other purposes.'" They state that Aquilla married Thomas Day, a free man of color whom they describe as a "Cabinet maker by trade, a first rate workman, a remarkably sober, steady and industrious man--, a highminded, good and valuable Citizen." They therefore pray that an act be passed "giving said Aquilla, the priviledge of migrating to this state." In his affidavit, R. M. Saunders avers that said Day is "of very fair character -- an excellent mechanic, industrious, honest and sober in his habits and in the event of any disturbance amongst the blacks I should rely with confidence upon a disclosure from him as he is the owner of Slaves as well as of real estate."
Result: granted