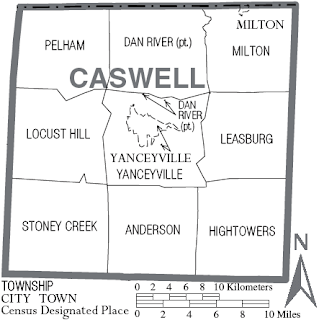 
In 1868 North Carolina adopted a new state constitution that enacted a system of county townships, thus abandoning the district structure is use for almost a century. Caswell County's four districts were replaced by the following nine townships:

Pelham, a community in the northwestern corner of the county, was established during the Civil War as a station on the Piedmont Railroad and was named for 25-year-old Major John Pelham of Alabama, a gallant soldier who was killed in battle on March 17, 1863. His mother was a McGehee from Person County. Young Pelham had almost finished the course of study at West Point when he left in 1861 to serve the Confederacy. He commanded a battery of horse-drawn

By 1865 a post office was serving the community and in 1872 it had the services of two doctors and a wheelwright; a general store and two churches also served Pelham.

William Byrd's famed "Land of Eden" included this area, and it is now farming land of importance and contains the rural homes of many people who work in Danville. In 1888 a Pelham Croquet Club met every Saturday afternoon and the Caswell News reported that "the lads and lassies say they have enjoyed those meetings and games hugely." Today a large commercial stone quarry sometimes mars the otherwise quiet days at Pelham.

"Richmond & Danville Railroad Co. had a contract with the Confederate Government to build the line from Danville to Greensboro for a loan of one million dollars in Confederate bonds. The Piedmont Railroad Co. was formed to do this work and the road was mortgaged to repay the loan. Capt. Edmund Myers of the Confederate Army was detailed to supervise the construction.

"At a meeting of the board of Directors of the Piedmont Railroad Co., at the office of the Company in the town of Danville, Va. on Wednesday, the 9th of September 1863, the minutes read as follows:

"On motion of Thomas P. Atkinson -- Resolved that the name of Pelham be given to the first Depot on the Piedmont Railroad in honor of the late gallant Major Pelham who lost his life in defense of his country at Kelly's Ford."

Several Pelham structures are photographed and described in: 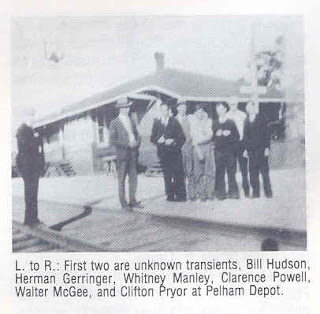 During these early days Pelham became famous as the place where many were married. A Rev. Thomas Walker lived with his wife, Ginny, and family on the present old 29 South of the Pryor farm. Preacher Walker (as he was known) was a Circuit Rider minister who traveled from place to place in northern North Carolina and southern Virginia. Couples came from far and near by wagon, buggy and train to be married. When train connections could not be made, they were given overnight accommodations. It is said the Walker home had the figure 18 in the parlor floor over which brides who were under age stood so they could get married. William Abner Fowlkes and Ella Frances Saunders were married by him on July 24, 1887. (See separate story.) Preacher Walker kept a journal of the marriages performed. These have been recorded in the County, and the journal is owned by J. B. Blaylock.

Ironically President Davis, who had argued for its completion in 1861, used the Piedmont route in 1865 in his flight south. The actual connection with the North Carolina Railroad at Greensboro was made only after the war, in the winter of 1866-1867. Difference in the gauges of the two lines was the holdup. In time the Piedmont Railroad became part of the Southern Railway (later Norfolk Southern) system.

A fourth-class Post Office at Pelham was established on July 1, 1887, and John Archer Pierce, agent for the Southern Railroad Company, was appointed the first Postmaster. The office was located in the depot, and the Post Office equipment consisted of a section of homemade pigeon holes. For some time the quarterly sales of postage amounted to no more than $5.00. Mr. Pierce held this office until May 23, 1893, when James Obediah Fitzgerald was appointed Postmaster and the office was moved across the railroad into his store. Mr. Fitzgerald held the office until his death, a period of forty-seven years. Paul Vincent Fitzgerald was appointed Postmaster to succeed his father on February 1, 1940.

Mr. Morris continued serving as Postmaster until his retirement in 1976. On December 17, 1977, Adele Walton Morris was appointed Postmaster. She had served as clerk of the office since 1958. Besides being clerk she worked at the Greensboro Post Office for four years and served as Officer-In-Charge at Milton, N.C. Post Office for three months.

Serving as Rural Carriers at Pelham have been the following:

Mrs. Morris is still serving as Postmaster. Until 1983 the Post Office building was still owned by the Fitzgerald family. It was purchased in 1983 by Mr. Hugh Pryor of Pelham.

"The Pelham Graded School, authorized in 1903, would be supported by a special tax of twenty to thirty-three cents on the $100 valuation. Trustees named were R. A. Travis, O. R. Hinton, F. D. Swann, J. A. Swann, and J. O. Fitzgerald." 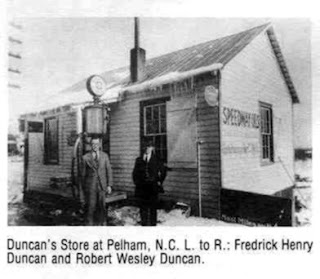 Pelham had two stores early in its history. One was on the Wright farm next to the home-house and was run by Charlie Wright. The other was Jim Fitzgerald's Store, which also contained the Pelham Post Office, as well as rooms upstairs to house railroad workers and other local workmen. This was a general merchandise store which sold any and everything available from shoe strings to a gallon of "lasses". Mr. Jim was postmaster for forty-seven years, followed by his son, Paul Vincent Fitzgerald, who also ran the store. Later when a new post office was built, William Ward ran a store there. 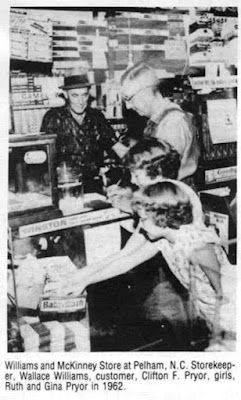 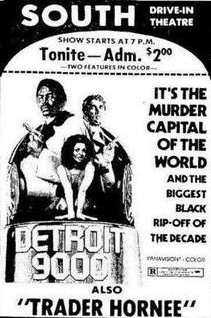 "Right now, there is very little to remind anyone that a motion picture drive-in stood in the out-of-the-way region just south of Danville at the North Carolina and Virginia state line.

"The South showed nothing but X-rated movies, so it was the perfect little 'getaway' because it was just off the two lane US29 bypass, it was a few miles out of town, and you didn't really worry about anyone that you knew seeing you there. Boy that was a joke! I live in Reidsville which is about 20 miles south of the old drive-in, and half the people there were from Reidsville! It's funny now, but it was embarrassing then.

"Anyway, the South was a really nice drive-in theater, meaning that it was clean and neat, the operators took care to keep it clean. It had a really nice concession stand, the food was decent, but the prices were outrageous! Of course, the drive-in operator was making his money at the concession stand, but by the way people jammed in there, you would think that someone was making some money at the ticket box. Before the features began, the line of people wanting to see the movie would form outside the South's gates. For a drive-in that only showed X-rated movies, and for one that was in the 'Bible Belt' as they call it, it was very popular. Needless to say, the term 'passion pit' fit the South Drive-In perfectly. Rarely did you see people sitting outside their vehicles. Let's just say, they were more cozy inside their cars and trucks. Sometimes there was more going on in the next car than there was on the screen above!

"Progress caused the demise of the South Drive-In. US29 went from two lanes to four, and of course, swallowed up the drive-in property. And the availability of VHS tapes meant people could stay at home to watch their movies. Along with her sisters around the country, the flicker from the South's projector dimmed for the last time somewhere in the late 1980's.

"The South is nothing more than memories today. If you're in your mid 30's and older, mention the South Drive-In, and watch the smile that comes across people's faces. Oh they remember it, whether they will admit it or not."


Robert C. Black III, The Railroads of the Confederacy (1952)