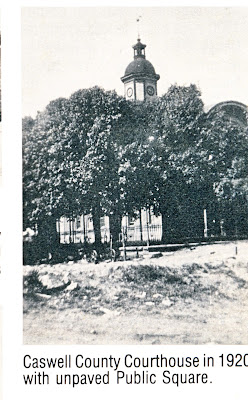 Photograph of Courthouse is in 1920, four years after the fire. It appears that all repairs had been completed. Note the absence of a formal square. Reports of the day described it as horribly dusty when dry and a muddy mess when wet.

For a while Friday afternoon the courthouse of Caswell county, at Yanceyville, was menaced with destruction by fire, which was started when a lightning bolt struck the pinnacle of the belfry. Happily the persistent efforts of Yanceyville citizens, who prize the substantial structure with a sentimental value which knows no computation, succeeded in quenching the flames with a bucket brigade. The belfry was ruined. The courthouse is heavily insured and there will be no monetary loss.

An hour after the lightning struck the courthouse the Danville fire department was asked to make the 18-mile run with one of the automobile engines. Two large chemical extinguishers were sent, but the man carrying the extinguishers when about half way to the Caswell capitol was flagged down and told that the flames had been subdued. The bucket brigade had proved effective after strenuous efforts.


At about 4:30 a heavy thunder storm passed over Yanceyville, doing considerable damage. During its height, a thunderbolt struck the top of the courthouse and within a few minutes flames were seen to be emerging from the belfry which crowns the two-story, stuccoed brick building. For an hour the flames gradually gained and began to eat their way down towards the main building. While the fire was burning a corps of men began removing the furniture from the courthouse, also books and records of great value. The storm was one of particular violence, and several residences were struck by lightning and set on fire. Mrs. Cora Slade was knocked senseless by a bolt, but recovered consciousness some time later. Lightning set fire to a quantity of feed and tore some fences to pieces.