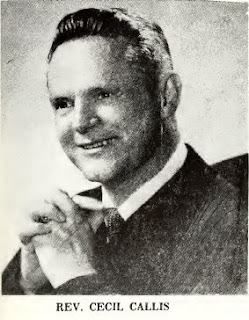 Mr. Callis was born at Willow Springs, Wake County, N. C, on May 13, 1923, the son of Mr. and Mrs. James Royal Callis. After two years at Presbyterian Junior College, Maxton, N. C, he attended Presbyterian College, Clinton, S. C, where he received his degree in 1914. He was awarded his B.D. degree by Union Seminary, Richmond, Va., in 1947; and ordination was by Winston-Salem Presbytery on May 4, 1947.

During his six years in Caswell County, Mr. Callis was active in civic and educational as well as religious affairs. As a member of the Yanceyville Rotary Club he served one term as secretary and treasurer; and when he left the county, he was the club's president. He was a member of the executive committee of the local P.T.A. and served as a member of the County Council of the Boy Scouts of America. He was Dean of several very successful Area Leadership Schools held at Bethesda, and was faithful in attending summer camps and conferences as a director or counselor.

In August of 1955, Mr. Callis was given a new automobile by the Bethesda and Yanceyville Congregations as an expression of their appreciation for his faithfulness in carrying out his pastoral duties.