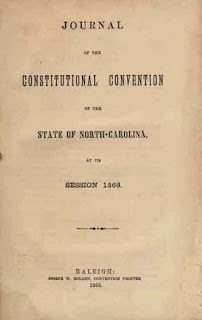 On January 14, 1868, a North Carolina constitutional convention, now known as the "Convention of 1868," opened in Raleigh. Caswell County's Wilson Carey was a delegate and a member of the Black Caucus.

Wilson Carey (b. 1831), a free black farmer, represented Caswell County. Born in Virginia, Wilson moved to Caswell in 1855 and taught school. During the convention, he spoke against proposals to attract white immigrants to North Carolina: "The Negro planted the wilderness, built up the state to what it was; therefore, if anything was to be given, the Negro was entitled to it."

Carey also served in the 1875 constitutional convention dominated by Democrats. He was elected to six terms in the state house and a term in the state senate. He left Caswell County after 1889 due to Ku Klux Klan violence.
Posted by RSF at 12:57 PM