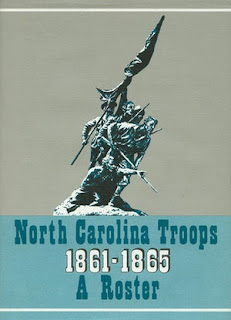 Now in its fifty-first year and twentieth volume, "North Carolina Troops, 1861-1865: A Roster" continues to chronicle the service of North Carolinians in the American Civil War. This half-century-long project has so far documented all of the Confederate artillery, cavalry, and infantry units raised by the Old North State during the years of conflict, including the Cherokee warriors of Thomas's Legion and the Junior and Senior Reserves. This current volume turns attention to some well-known and some little-known players in the struggle.

The first few pages of Volume 20 detail the service of the thirty-six Confederate generals from North Carolina, many of whom are well known. No fewer than eleven have had at least one biography written, and others are recounted in histories of the units they commanded or studies of battles or campaigns in which they participated.

The much larger, and more important, sections of this volume showcase army staff officers, unassigned enlistees, and a portion of the North Carolina Militia. Staff officers are men who worked behind the scenes to ensure that the army ran as smoothly, efficiently, and effectively as possible. Their work may go unrecognized, but it is the backbone of any military organization. The areas in which these officers served include commissary staff, chaplains, engineers, medical staff, ordnance, provost, quartermaster, signal corps, and more. In the higher echelon, staff officers served the field generals directly as adjutant general staff or aides-de-camp. All these positions were extremely important, if often overlooked. The introductory section detailing how military staff functioned efficiently outlines for readers how a min-nineteenth-century army was organized.

Unassigned enlistees comprise a very small but interesting segment of this volume. These men enlisted for service but were never assigned to a unit. Reasons vary, but include men being physically unfit for combat, others captured in their camp of instruction before being assigned, and yet others captured in hospitals while convalescing from illness or injury. The list, though small, is significant for researchers and genealogists.

Researchers, genealogists, and series enthusiasts will find much to like about this latest volume of the "North Carolina Troops" series. But this important work is not yet complete. Still to come are volumes on the remainder of the North Carolina Militia, Navy and Marine personnel, North Carolina Union Volunteers, and United States Colored Troops. Once finished, the series will truly represent all North Carolinians who served in any capacity during our nation's darkest hour. If this volume is any indication, the series is in good hands with coeditors Brown and Coffey.