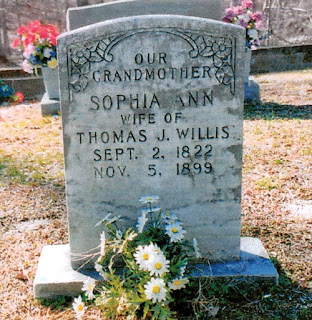 Who are the parents of Sophia Ann Lea (1822-1899)? She was the person whose grave marker was "modified" to show a different birth year. See the post on the Caswell County Historical Association Facebook Page that shows the grave marker before and after it was butchered.

Many with family trees on Ancestry.com show Sophia Ann Lea as a daughter of Reverend Solomon Lea (1807-1897) and Sophia Ainger Lea (1810-1866). This appears unlikely as Solomon Lea and Sophia Ainger were not married until 1837. Moreover, as of 1822 (birth year of Sophia Ann Lea), Lea and Ainger had not met. It was over ten years later when Lea and Ainger met in Warren County, North Carolina. Their first child was born September 10, 1838 (Anness Sophia Lea). This information comes from primary-source public records and the memoirs of a known daughter of Solomon Lea and Sophia Ainger Lea: Wilhelmina Lea (1843-1936). Note that Wilhelmina Lea was alive during many of the years relevant to this inquiry. Presumably, she knew the identify of her siblings. See the notes at the end of this article.

However, is this the problem: confusing Sophia Ann Lea (born 1822) with Anness Sophia Lea (born 1838)? There should be no confusion. It is well-documented that in 1841 Sophia Ann Lea married Thomas Jefferson Willis (1816-1879). He is her only husband.

Thus, there is no reason to confuse Sophia Ann Lea with Anness Sophia Lea.

So, if Solomon Lea and Sophia Ainger Lea are not the parents of Sophia Ann Lea, who are? Likely candidates are Archibald Lea (born 1799) and Lucinda Hendrick (born around 1801). They were married in Caswell County, North Carolina, pursuant to a marriage bond dated July 11, 1821. And, Sophia Ann Lea was born the next year (September 2, 1822). Of course, this does not establish a family relationship.

What evidence supports this parental possibility? What is known is not conclusive, but interesting.

First, but not in chronological order, there is the 1850 United States Federal Census:

This shows in the household of Thomas J. Willis (husband of Sophia Ann Lea Willis) a 14-year-old Cornelia F. Lea. Unfortunately, the census does not explain the relationship between Cornelia F. Lea and the head of the household. It just shows she was 14, female, and born in Caswell County.

One theory is that Cornelia F. Lea, born around 1836, is a sister of Sophia Ann Lea Willis. If so, they share parents. Who are the parents of Cornelia F. Lea? They apparently are Archibald Lea and Lucinda Hendrick Lea.

But, here is where a concern arises. Cornelia F. Lea is enumerated in two 1850 United States Census records. While this is unusual, it is not unprecedented. We have seen several examples, it being explained by a person being found in two households on different census-taking dates. Here is the 1850 census record for the Archibald Lea household:

Is there additional evidence? Yes, but it too is inconclusive. It is the 1840 Unites States Census record with respect to the household of Archibald Lea:

Here are the females enumerated with birth-year ranges converted to year ranges:

No other possible daughter has been found for the 1821-1825 female slot other than Sophia Ann Lea. But, this does not establish conclusively that Sophia Ann Lea is a daughter of Archibald Lea and Lucinda Hendrick Lea.

So, what do we know; not much:

However, we do conclude that Sophia Ann Lea is not a daughter of Solomon Lea and Sophia Ainger Lea. Those who perpetuate this relationship are irresponsible.
_______________

1. We know that Family Search shows Sophia Ann Lea as a daughter of Archibald Lea and Lucinda Hendrick Lea, but without any supporting documentation. One comment there states as follows (but without evidence):

2. Others have attempted to explain how and why the grave marker of Sophia Ann Lea was changed. However, these explanations are not convincing. Here is one from Find A Grave:

DavidTerry91  Sophia Ann Lea - Gravestone: Sophia Ann Lea's grave marker was placed by her grandchildren but with an incorrect birth date.  An unprofessional attempt was made to correct the date which deteriorated over time.  If viewed today the original incorrect date is visible.  Her date of birth is September 2, 1822.

"My father attended a country school near home for a number of years, preparing himself for college, meanwhile, by hard study. He was sent, as were his two oldest brothers, to the University of North Carolina. His health failing, his studies were interrupted for a time; but an active outdoor life restored him, and he went back to complete the course, graduating in 1833 with fair honors. He then began his life work as a teacher at Warrenton, N.C., where he taught for two years. It was while teaching there that he met the lady whom he married a few years later. She was a teacher like himself.

"My father was married in 1837 to Miss Sophia Ainger, an English lady of marked piety and intelligence. She was a most congenial spirit and a great help to him in his work as a teacher. She died in 1866. The world little knew how sadly he missed her companionship and what a void was in his heart. Eight children were born to them, six daughters and two sons. One of the latter died in infancy. Two married daughters have passed away."

All eight children referenced by Wilhelmina have been accounted for, and they do not include Sophia Ann Lea.