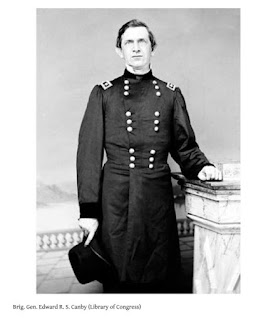 Caswell County Quiz: Other than as in charge of the military district that included Caswell County after the Civil War (during Reconstruction), how General Edward Richard Sprigg Canby (1817-1873) more directly affect the county?

During the autumn of 1867, [North Carolina Governor] Worth and [General] Canby became embroiled in a dispute over the military's intervention in the state's judicial process. The case of Caswell County Sheriff Jesse C. Griffith marked the culmination of their disagreement. Griffith's case originated in a wartime incident that involved a Confederate deserter-turned-Union scout named William Johnson. In early 1864, Johnson and two comrades deserted from the Confederate army and headed for Union-held Tennessee. During their flight, the three men entered a house and stole about $20 worth of food and $5 in Confederate currency. Whereas Johnson succeeded in making his escape, his comrades were captured and tried for burglary. They received a pardon after agreeing to rejoin the Confederate army.

Johnson, meanwhile, became a lieutenant in a federal regiment in east Tennessee and later served as a guide for Maj. Gen. George Stoneman's Union cavalry during its raid through western North Carolina. After the war, Johnson returned home to Rockingham County. He was arrested, tried for burglary in the Caswell County superior court, and sentenced to die. Johnson was then incarcerated in the county jail at Yanceyville under the watchful eye of Sheriff Griffith.

Acting on the assumption that the military authorities would overturn the conviction, Worth pardoned Johnson but ordered him to pay the jail fees and court costs. Unable to pay, Johnson remained incarcerated in the Caswell County jail. In April 1867, Johnson's attorney, Albion W. Tourgee, informed General Canby that he would post bond for his "penniless" client if the general secured his release.

Canby ordered an investigation of the Johnson case. The investigating officer, Lt. John O'Connell, reported that Griffith had already released Johnson, evidently to avoid military intervention. The lieutenant described Johnson's former cell as an iron cage nine feet square by six feet high, and he noted that the prisoner had been bound by a six-foot chain. According to O'Connell, Johnson "was punished chiefly because of his Union sentiment" and his actions as a federal officer. In October, Canby's judge advocate, Maj. E. W. Dennis, recommended that Sheriff Griffith be arrested and tried by a military commission for cruel and inhumane treatment of Johnson.

Acting on Dennis's recommendation, Canby had Griffith arrested and taken to Charleston, South Carolina, for trial by a military commission. Worth informed President Johnson that Griffith was arrested "on some unknown charge" preferred by [William] Johnson and Tourgee, "both of them men of the most detestable moral character." The governor noted that this was but the latest in a series of arbitrary arrests by the military, in which the accused were "transported to distant places of confinement" and held for months without trial. The governor indicated that he had "earnestly remonstrated against the iniquity of such proceedings" in letters to Canby [and to General Sickles before Canby], but to no avail. "No form of Military despotism can be more terrible to the orderly citizens than these summary arrests," Worth declared. The governor thus employed a stratagem he would use often in his disputes with Canby -- accusing the military of injustice to deflect criticism of the civil judiciary.

[President] Johnson handed [Governor] Worth's letter to General Grant, and Grant sent it to Canby for comment. On November 14, the district commander wrote a detailed report and enclosed over a dozen corroborating documents. Canby explained that he had ordered Griffith's arrest and trial because the evidence implicated him "as one of the agents of injustice and oppression practiced on [William] Johnson." The general stated that Griffith was brought to Charleston -- "not thirty-six hours from his home" -- because a military tribunal was already in session there, offering the prospect of speedier trial than anywhere else in the district. When it became apparent that the trial would be delayed, Canby explained, he released Griffith on his own recognizance and allowed him to return home pending his trial date.

Canby blamed the ongoing persecution of loyal North Carolinians on a loophole in the state's Amnesty Act of 1866. The act shielded all persons who had been "in the civil or military service of the State [or] the late Confederate States or as officers & soldiers of the Armies of the United States." But the law did not protect native loyalists who had served the Union army as civilian scouts, spies or guides, or who had committed acts of war while deserting from or resisting conscription in the Confederate army. "The case of Johnson is of this class," Canby noted. "[H]e was tried not for the offense for which he was indicted and ostensibly tried, but . . . for deserting from the Rebel Army." According to Canby, the wartime indictment against Johnson had expired with the downfall of the Confederacy; had he been executed, it would have been murder.

However, there is a bit more to the story that involves Caswell County Sheriff Jesse C. Griffith, which may make him unique among those who held the office: he was twice arrested! Once by General Canby in 1867 and again by Colonel Kirk after the 1870 killing of John Walter (Chicken) Stephens.
Posted by RSF at 5:51 PM