Sunday, September 15, would have been Ray Denny Warren's 94th birthday. But he never made his 20th.

He was born in Caswell County's Hightowers community September 15, 1925, a son of Floyd Doak Warren (1888-1926) and Mabel Beatrice Murphy Warren (1894-1965). The young Warren never knew his father, who died of heart disease in 1926 when Ray was not two years old. His mother was left to raise nine children. Ray was one child removed from being the youngest.

A few days before his 18th birthday Ray enlisted to fight in World War II. He chose the United States Naval Reserve and eventually served aboard the Destroyer "U.S.S. Bowers" as a Seaman First Class. Ray was killed in action April 16, 1945.

While operating near Okinawa the Destroyer "Bowers" was assigned to anti-submarine screen duty. At dawn on April 16, the destroyer escort shot down one attacking Japanese plane. Then at 09:30, two more planes came in, flying low and fast. "Bowers" maneuvered radically to avoid the planes as they split to attack the escort. The first came in dead ahead, but the "Bowers" guns brought it down.

The second passed over the ship as her port guns came to bear. Despite the heavy gunfire, the kamikaze regained altitude, turned, and came in from a 45-degree angle forward. It crashed into the warship's flying bridge, spraying high octane gasoline over the bridge and pilot house. The plane's bomb penetrated the pilot house and continued down through the ship for 20 feet before it exploded and sprayed the deck with fragments. Fire-fighting parties brought the flames under control in about 45 minutes; but 37 men from the ship were killed, 11 were reported missing, and many of her 56 wounded died later.

Whether Ray's body was recovered is not known. However, in the Alamance Memorial Park Cemetery a bronze marker pays tribute to his life and service.
_______________ 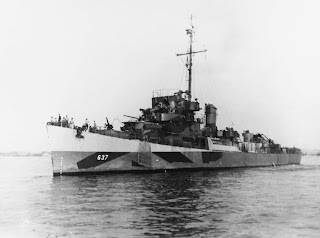 The U.S. Navy destroyer escort USS Bowers (DE-637) arriving in the Kerama Retto, Ryukyu Islands, under her own power after being hit by a Kamikaze on 16 April 1945. Wreckage of the plane, a Nakajima Ki-43 (Allied code name "Oscar"), can be seen embedded in the the ship's bridge face. Note Bowers' very unusual paint, with traces of Camouflage Measure 31 or 32, Design 16D, showing through Camouflage Measure 22. The ship may have been undergoing repainting at the time she received this damage.
Posted by RSF at 7:16 PM