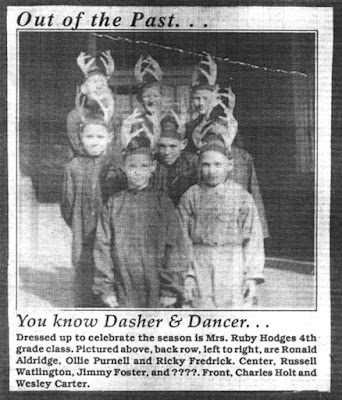 "My mother took this picture and one of each of the groups that appeared in the play. The hidden reindeer may have been Earl Smith, Jr. There was a group of reindeer, elves, snowmen. and chimney sweeps.

"Harriet Johnston was Mrs. Claus and John Webster was Santa.

"The story line also included a set of figures that Santa's elves had made. Dolls were personified by Linda Gunn as a china doll (geisha?), Linda Cook as a ballerina, Judy Buchannan as a baby doll. Sarah Sykes and Linda Durham were also dolls but I don't remember what they were.

"There were four cowboys: Carroll Aldridge, Robert Crumpton, Charles McMullin and Richard Rogers. Patsy Chistenbury played the magic fairy that introduced each group. Every group performed a little skit and/or song. My mother gave every member a photograph of his/her group. I used to have an entire set but it was lost somewhere along the way.

"I think Doris Potter England narrated the play. I remember Paul Goforth was one of the elves. Many names are lost to my memory because I don't have the set of pictures to refer to. Elizabeth. Thompson made sure that every member of the class had a part in the play and it was a big hit for the elementary classes and I think we may have performed it more than once."

The mother of Carroll Lee Aldridge is Luetta Carroll Aldridge (1914-1997). The photograph was taken in 1956. At some point it was reprinted in The Caswell Messenger (Yanceyville, North Carolina) as part of that newspaper's "OUt of the Past" series.
Posted by RSF at 10:05 PM