By Virtue of a Deed of Trust Executed to me on the 7th day of November last, by James D. Newsom, for certain purposes therein mentioned, I shall sell to the highest bidder, on the 20th day of December next, at the Court House door in the City of Raleigh, the following valuable property, to wit:
. . . .

Also, in the town of Milton, Caswell county, on Tuesday, the 1st day of January, 1856, the Milton Cotton Factory and Mills, and about 15 comfortable dwelling houses, with lots and gardens attached to each, embracing about 16 or 17 acres of land in all.

The Cotton Factory building is of brick, 46 x 80 feet, four stories high, covered with a zinc roof, and contains nearly two thousand spindles, 14 cards, 2 drawing frames, 20 looms, with all the necessary gearing and machinery for operating the same, with two water wheels and a steam engine attached. A part of the above machinery is new, having been lately purchased; the balance but little worn and capable of doing first-rate work.

The Grist Mill is a large building, 50 x 60 feet, containing two new pair Burr Mill-stones for manufacturing flour, with smut mill, elevators, and all other machinery necessary to a first-rate manufacturing mill. Also, a large pair Eusopa's Mill-stones for manufacturing corn meal. These mills have during the last two years been thoroughly repaired at considerable expense, and are thought by many to be the most desirable property  in the county of Caswell, being in the town of Milton, on Country Line Creek, with good boat navigation from near the Mill door to the Richmond and Danville Railroad, about five or six miles distant. I deem it unnecessary to say more at present, as those wishing to purchase are requested to examine for themselves. --

There will also be sold, at the same time and place, a negro man by the name of Willis.

Any part or all of the foregoing property may be sold privately before the day of sale, but if not it will then be sold without reserve t the highest bidder.

The title to all the foregoing property is thought to be indisputable. I shall convey such title as is vested in me by said trust and no other.

John Barker Barrett was the son of Jonathan Farnham Barrett and his wife, Anne Barker of Granville, New York. As a young man, John came to Milton and in 1851 he was listed as one of the charter members of the Milton Savings Institute. He was involved as a partner in the Milton Cotton Factory in 1850 with Neuson [Newsom?] & Holden. Water and steam power was used in the factory which employed 18 men and 50 women. It produced 146,000 bales of cotton and 90,000 yards of cloth.

Mr. W. W. Holden, partner and also editor of the North Carolina Standard in Raleigh, sold his interest to Barker and Neuson [Newsom?] in 1851. The cotton factory was advertised for sale on December 15, 1855 and at that time it consisted of a four-story brick building, 46x80, with a zinc roof, 2,000 spindles, 14 cards, 2 drawing frames and 20 looms. Included with the factory were 15 dwelling houses, with lots and gardens attached to each, embracing about 17 acres of land. Shortly afterwards the factory burned and it was not rebuilt. Sometime later, the Barrett family moved to Wytheville, Va. were John died February 20, 1900. 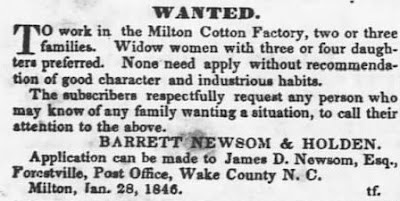