The Sharecropper's Wife: A Memoir 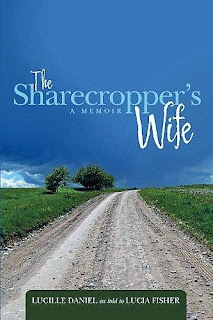 Growing up in rural Person County, North Carolina, during the Great Depression, Lucille Daniel learned how to work at a very early age. Like most sharecroppers, her family moved almost every year, enduring harsh conditions and dishonest landowners.

She attended a one-room school house through the eighth grade, and married a sharecropper at age 19. Being a sharecropper's wife meant uprooting her family every spring and moving to a different tobacco farm. It meant using every ounce of creativity and resourcefulness to turn a shack into a home. It meant using her faith to make something out of nothing.

Through it all, she kept one dream in her heart: her children would get the education that she was denied. They would have a better life than she did. They would not be forced to work someone else's land. And they would leave the tobacco fields forever.
Posted by RSF at 6:22 PM