The Upper Country Line Primitive Baptist Association was held with the church at Lynch's Creek, Saturday, Sunday and Monday. From several points of view this was one of the best associations held in recent years. Lynch's Creek church is in one of the finest sections of Caswell county. The people are amply able to take care of an association and they manifested to the greatest extent their willingness to do so. The church authorities and their neighbor friends were diligent in their determination that no person should be without a home and the hospitality of these good old Caswell homes poured out in abundance. In short, the people were cared for, and cared for well.

The general behavior on the grounds was better than usual. Of course there was some misconduct on the outskirts where those who went for base pleasure stayed; but near the preaching stand the order was better than in recent years. This was due largely to the fact that the stand was far removed from the throng.

The preaching itself was of a very high order, there being present several of the ablest preachers of the denomination. The introductory sermon was preached by the Moderator of the Association, Elder L. H. Hardy. The sermon was worth to be beginning of the several excellent sermons that followed. Having mentioned Elder Hardy, we want to add that he is one of the best executive and presiding officers that the Association has ever had. The excellent order, the care for the people, and the general success of the occasion was largely due to his splendid management.

The Association closed Monday at 12 o'clock and the people who had stayed to the end began to move toward their homes, carrying with them an admiration for the fine country that they had visited and full appreciation of the kindness of the people.

The crowd was estimated at between five and seven thousand, Sunday as usual being the chief day.

The Association will meet next year at Lickfork. 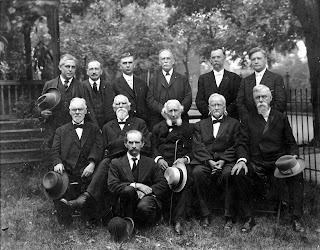 James Murray to Congregation of Baptist order and faith at Linches Creek Meeting House formerly Stone's Meeting House and to John Landers of the Congregation, a spring as long as it continues a place of worship with penalty of $100. 17 August 1802. Witnesses: Larken Herndon, Alexander McMinnemy.

Lynch's Creek Primitive Baptist Church, sometimes called Hyco Primitive Baptist Church, located on the Corbett Ridge road about twelve miles southeast of Yanceyville, was organized in 1799 according to its original minutes. This church is now extinct. Source: When the Past Refused to Die: A History of Caswell County North Carolina 1777-1977, William S. Powell (1977) at 457.
Posted by RSF at 8:54 AM