The North Carolina Legislature on March 6, 1899, granted a charter to the Methodist Orphanage at Raleigh, N. C. On Thanksgiving Day, November 29, 1900, with proper religious ceremonies the orphanage was officially opened for the reception of children, and on January 7, 1901, the first child was admitted.

Reverend John Wesley Jenkins (1832-1906) who in 1891 married, as his third wife, Caswell County's (or Person County's) Elizabeth (Betty) Bradsher (1839-1901). For years, against great odds, Methodist minister Jenkins fought for the orphanage. And, his third wife, Betty Bradsher, contributed $800 toward the establishment of the orphanage. Note the following from The State magazine 22 March 1947:

"Today the orphanage owns 96 acres in the home tract, a farm of 241 acres, eighteen buildings, with a total valuation of approximately $1,500,000 and is caring for three hundred children. A man had a wonderful vision of a home for orphaned children of the Methodist people, an unfailing faith in the abilit of the [Methodist] conference to build and maintain such a home, and a strong determination to see it done." 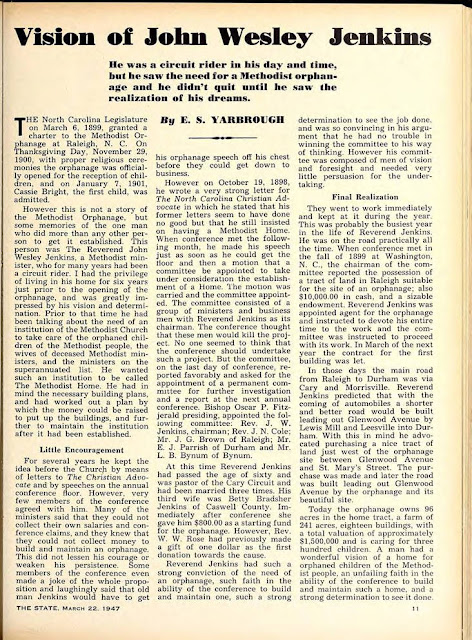