Introduction: Person County, North Carolina, was formed from Caswell County by act of the General Assembly in late 1791. The compilation of 3286 marriage records is from bonds, licenses, and minister's returns. The bonds were issued by the County Clerk of Court. Extant original bonds are filed at the North Carolina State Archives, Raleigh, NC. Minister's returns are on film and taken from a marriage register required after 1851. The abstracts herein include all information found on the record except in some cases the name of the Clerk of Court or Deputy Clerk was not included."
_______________

Introduction: Person County, North Carolina, was formed from the eastern part of Caswell County 1791 [1792]. The first meeting of the County Court was March 1792. Deeds recorded for present Person County from 1777-1791 appear in the Caswell County Deed Books. Abstracts were published in 1989. Prior to 1777, both Person and Caswell were in the northern part of Orange County.

Person County is bounded by Caswell County on the west, Granville County on the east, Durham and Orange Counties on the south, and by the state of Virginia on the north, mainly Halifax Co. Deed Books are at the office of the Register of Deeds, Roxboro, NC, 27573. Books A through G total 2899 pages covering 33 years of land transfers, some grants from State of North Carolina, deeds of slaves and other personal property, powers of attorney, division of land to inheritors, and migration of inhabitants.
_______________

Foreword: This book contains a listing of marriage bonds before 1851. After 1851 marriage certificates were issued. These are on file in the North Carolina State Archives. It is suggested that all records be examined for more information than is give herein. Bonds often will give the name of others such as family members of his or the bride's family, bondsmen, and person performing the ceremony.
_______________ 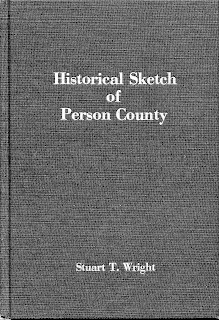 Dedication: This volume is dedicated to my parents -- in honor of Frances Critcher Wright, lifelong Personian by choice, and in memory of Wallace Lyndon Wright, adopted Personian whose interest in the history of the county far exceeded that of most natives.
_______________ 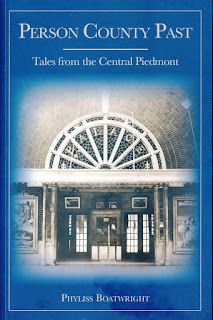 Introduction: I've lived in or near Person County, North Carolina, for the past couple of decades. I have had the pleasure of working here for the past seven years, as a staff writer for the Courier-Times, the Roxboro community newspaper that serves Person County. . . . What I've tried to do in this small volume is focus on what I think are a few of the most interesting landmarks and a few of the most interesting folks. This is by no means meant to be an all-inclusive history of Person County. That would take volumes. I hope, however, that those who read it enjoy revisiting a few of the people, places and events that truly do make it better in Person.
_______________

Dedication: To the Men and Women of Person County; to those old friends who have wrought and toiled and grown old along with me; and to the younger generation, the sturdy offspring of old acquaintances of mine, with the sunlight of youth in their faces and the love of native soil in their hearts; I dedicate with affection these rambling notes of an old man's recollection.
_______________ 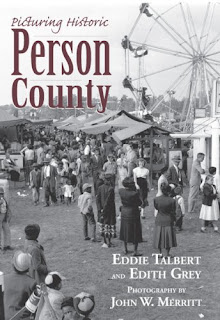 Tucked away from the bustle of nearby Raleigh and Durham, Person County, North Carolina, is an oasis of easygoing Southern charm. The photography of John Wesley Merritt, shutterbug and lifelong Roxboro resident, brilliantly captures the spirit of this idyllic setting as it was in the 1940s and 1950s.

Producing a vivid portrait of a bygone era, Merritt had the rare talent of preserving a whole way of life through the details he recorded on film from streets and shops to fields and farm stands. Captions and essays by Eddie Talbert reveal what the photographs do not. Hard times and good times, historic facts and interesting details are all collected here in a unique edition that celebrates a cherished era in Person County's history.
_______________

Miscellaneous land records are a "catch all" of land disputes, agreements, surveys, etc. This collection is actually placed in alphabetical order and not date order. This county has two boxes, the first covers A to E, and the second box E-S.

Miscellaneous land records are a "catch all" of land disputes, agreements, surveys, etc. This collection is actually placed in alphabetical order and not date order. This county has two boxes, the first covers A to E, and the second box E-S.

This color book contains cropped images of the 1928 County Soil Map for Person County, N.C. These soil maps contain a lot of historical information. Primarily, church, mills, towns, ferry, bridge, and school names. Each section of the map was cropped to fit one-page in this book, including every name of any item on that part of the map. Then an index is created to catalog every item for the entire county. The index is in the form or River, Name, Creek, Name, School, Name, Church, Name etc. The back cover of this book shows what one-page in this book looks like - from a visual scale, as well as quality of the image. NOTE: No historical information has been added. This is purely an easy way to search these maps in color, in book form.
_______________

Preface: When I published Alexander Rose of Person County North Carolina and His Descendants in 1979, I dealt only with my Rose ancestors and not with my other forebears. In this volume I have gathered information on all the ancestors of my grand-parents, George McNeill Rose and his wife, Augusta Jane (Steel) Rose. Sketches of these ancestors constitute two sections of this anthology.

To these sketches I have appended other papers relating to my family. The two genealogies, one by Thomas D. Rose and the other by Wilhelmina Lea, have not previously been published and, since they contain information which should not be lost, I have included them.
_____ 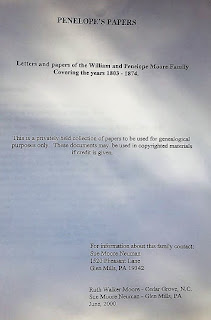 Growing up in rural Person County, North Carolina, during the Great Depression, Lucille Daniel learned how to work at a very early age. Like most sharecroppers, her family moved almost every year, enduring harsh conditions and dishonest landowners. She attended a one-room school house through the eighth grade, and married a sharecropper at age 19. Being a sharecropper's wife meant uprooting her family every spring and moving to a different tobacco farm. It meant using every ounce of creativity and resourcefulness to turn a shack into a home. It meant using her faith to make something out of nothing. Through it all, she kept one dream in her heart: her children would get the education that she was denied. They would have a better life than she did. They would not be forced to work someone else's land. And they would leave the tobacco fields forever. 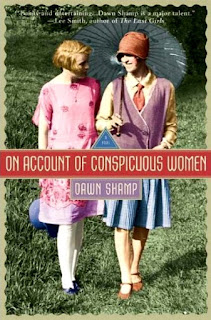 Welcome to Roxboro, North Carolina, a crossroads hamlet where, in 1920, tobacco and bootleg liquor thrive and most folks seem to agree that women are meant to know their place. But four extraordinary, determined young ladies are about to leave their boot prints on this small Southern town, and nothing will ever be the same.