In 1935 the North Carolina General Assembly authorized the establishment of the North Carolina Highway Historical Marker Program (Public Laws, Chapter 197). From that time forward, the program has been administered as a cooperative venture among state agencies. It is presently the joint responsibility of the Historical Research Office, Division of Historical Resources, Department of Cultural Resources, and the Traffic Engineering Branch, Division of Highways, Department of Transportation. The North Carolina Highway Historical Marker Program is one of the oldest such programs in continuous operation in the United States.

Caswell County has fifteen highway historical markers, all of which will be discussed on this weblog in the order of dedication.

In 1839, a twist of fate led to one of the most important breakthroughs in North Carolina agriculture history. Tobacco had always been a major crop for the region, but not until the accidental development of the “bright leaf” variety did the market for the product really start booming.

Stephen was a slave on the farm of planter Abisha Slade near the Virginia border in Caswell County. He worked as a blacksmith on the Slade farm. Another of his jobs was overseeing the curing process of the tobacco crop. On one occasion, due to the warmth created by the fire, Stephen fell asleep during the process. A few hours later, he woke up to find the fire almost completely out. To try to keep the heat going, he rushed to his charcoal pit (part of his blacksmithing operation) and threw hot coals on the fire which created a sudden, immense heat. The heat from the charred logs cured the tobacco quickly, leaving it with a vivid yellow color.

The trade press in the late nineteenth century investigated the discovery of the process, interviewing those still living with firsthand knowledge of the events. The account is one which has fascinated North Carolinians for generations.

The flue-cured tobacco became known as bright leaf tobacco and the variety became popular with smokers. Other farmers learned of and used the new process as well. Although the discovery took place on a piedmont plantation, farmers in the coastal plains soon adopted the process and constructed curing barns by the hundreds. By 1857, Abisha Slade was harvesting 20,000 pounds annually and making some of the highest profits ever. Bright leaf tobacco led North Carolina to a dominant position in the tobacco industry.

Point of View (PBS) website: Point of View
Stephen Slade, (colored) of Caswell County, the first man to discover the art of making bright tobacco, is in the city today. He is now sixty-five years old and in good health. Source: Richmond Dispatch (Richmond, Virginia), 23 March 1886. 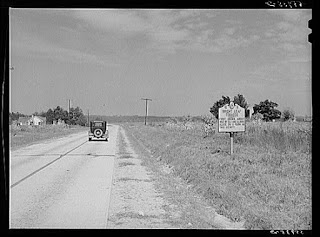 The marker discussed above is not at the original location. Initially, in 1936, it was placed in the Covington community on Old Highway 86 between Purley and Yanceyville (see photo). The marker was moved to a location nearer the Slade family farm. Original Text:Bright Leaf Tobacco: First grown about 1852 by Eli and Elisha Slade on a farm in this vicinity. Note no mention of slave Stephen. And, Elisha most likely should have been Abisha. Eli most likely was Abisha's brother Elias.

"Flue-curing [a process accidentally invented by Stephen, a slave in Caswell County in 1839] turned tobacco a bright 'lemon yellow.' Many commented on the mildness of this tobacco and its particular suitability for cigarettes. But what they could not have known is that this process also subtly changed the chemistry of the leaf to make it slightly acidic rather than alkaline…..

"Smokers soon found they could take cigarette smoke deep into their lungs, rather than holding the smoke principally in their mouths as they did with pipes and cigars. In this way - as we now know - nicotine absorbs rapidly into the bloodstream; some seven seconds later it reaches the brain. Nicotine addiction was born…. This physiological process would create a mass industry and a consequent epidemic of tobacco-related diseases."

"The Cigarette Century: The Rise, Fall and Deadly Persistence of the Product the Defined America," Allan M. Brandt (2007).

Descendants of Caswell County's Slade family recall that the tobacco barn where the slave Stephen accidentally cured the first bright leaf tobacco in 1839 was later disassembled and the logs used to construct a barn that was still standing in 1977. This photograph shows some of the logs from that barn.

The cabin (with chimneys) on the Slade family farm, while of indeterminate age, is believed to date from the mid 1800s, with many modifications over the years. Legend tells that the slave Stephen, who accidentally discovered the bright-leaf tobacco curing process, lived in his own cabin. Whether this was his cabin has not been confirmed. Some believe it is. Note the tobacco barn in the left background. (Courtesy NCSHPO.)

Clerk of the Caswell County Court 1841-1854. Closely associated with the discovery of Bright Leaf Tobacco in Caswell County, North Carolina around 1839. Made many public appearances to share the bright-leaf process with other farmers. Prosperous and outgoing, he built a brick house in Yanceyville, North Carolina, and at one time had many servants. The house has been demolished and the property is occupied by a funeral home parking lot. In common with the rest of Caswell County Slade was adversely affected by the Civil War. He went through bankruptcy and was left penniless in 1866. The foreclosure on his house by Lazarus Fels, the future soap magnate (Fels Naptha Soap), was mercifully postponed until after Abisha's death in 1869.

The foregoing is from: The Heritage of Caswell County, North Carolina, Jeannine D. Whitlow, Editor (1985) at 478 (Article No. 646, "Abisha Slade and His Brothers and Sisters" by James E. Anderson).

In 1935 the North Carolina General Assembly authorized the establishment of the North Carolina Highway Historical Marker Program (Public Laws, Chapter 197). From that time forward, the program has been administered as a cooperative venture among state agencies. It is presently the joint responsibility of the Historical Research Office, Division of Historical Resources, Department of Cultural Resources, and the Traffic Engineering Branch, Division of Highways, Department of Transportation. The North Carolina Highway Historical Marker Program is one of the oldest such programs in continuous operation in the United States.

Prior to 1935 the North Carolina Historical Commission, which had been established in 1903, and private organizations (such as the Daughters of the American Revolution) sponsored a small number of historical markers and plaques. The state program, modeled after one begun in Virginia in 1926, was an effort to standardize the practice of marking sites of statewide historical significance. The silver and black markers have become a familiar part of the state's landscape since the first one was put in place in Granville County on January 10, 1936. Over 1,500 state highway historical markers have been erected. At least one stands in every county.

For young people, the markers may spark a curiosity that leads to further study of and appreciation for the historical development of the region. For visitors the signs may be their only exposure to the history of the Tar Heel State. For residents the presence of a state marker in their community can be a source of pride, a signal that an event of historical significance took place close to home. The Department of Cultural Resources and the Department of Transportation remain committed to the program as it moves toward its centennial.
Posted by RSF at 11:56 AM