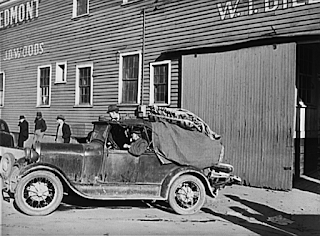 This year, another 15 tobacco warehouses have closed in North Carolina, bringing the number of active warehouses down to 89 - the lowest number in 50 years - and leaving the rural landscape littered with empty buildings where growers once celebrated or mourned the annual market season.

W. L. Hopkins Jr. kept the Piedmont Tobacco Warehouse in Mebane open for as long as he could; but this year, he and his wife, Lou, who kept the books, called it quits. Two years ago, he was down to two sales a week. Last year, his growers could produce only enough tobacco for one sale a week, and this year, he would have had one every three weeks. That's not enough to pay the workers it would take to run the warehouse.

His wife says she will miss the fellowship of the farmers and their families she used to see at the warehouse every year. "What I enjoyed about it, you'd meet all kinds of people, really nice people who worked hard," she says. "That's not an easy job. I enjoyed being around them."

Hopkins, 72, still raises tobacco with his son on the family farm in Alamance County. For now, he will continue to rent space in his warehouse for local manufacturers to store finished goods until customers are ready for delivery.

Warehouse operators have long relied on second incomes to supplement their tobacco earnings, which come mostly from a 2.5 percent commission on every sale. That rate, set by the General Assembly in the 1890s and unchanged since, may be part of the problem, Dunkley says. Though the costs of running a warehouse have steadily increased, warehouse owners have not been allowed to negotiate a more profitable cut.