While both a mortgage and a deed of trust were used to provide security for a debt, they were different. A mortgage did not involve the third-party trustee, and usually was enforced through judicial process in a court of law. A deed of trust involved the third-party trustee and could be enforced outside the judicial process. See the newspaper notice below where the trustee advertised sale of the property securing the debt. No court need be involved. Simply, a mortgage created a lien on the pledged property that must be enforced, while a deed of trust actually transferred title to the property.
_______________

By virtue of the powers conferred in a certain deed of trust, executed to me by J. Y. Fox and wife Rosa, on the 21st day of April, 1892, and duly recorded in Register's office of Person county, Book LL, page 322, I will, on the first Monday in July, 1896, sell at the court house door, in Roxboro, to the highest bidder for cash, the following described land and premises to wit: A certain tract of land lying and being in Person county, Olive Hill township, immediately on the public road leading from Roseville to Leasburg, and bounded by the lands of William Horton, Mary J. Fox, Jennie Thomas, Buck Childress and others, containing 120 acres more or less. The sale being to satisfy a claim of Mrs. Aniva Dixon, the cestui que trust.

Here is another interesting 19th century deed of trust (click link). This arose as a result of a judgment against Albert Atkinson Pattillo in the 1868 Caswell County Court of Pleas and Quarter Sessions. To satisfy the judgment, Pattillo provided a deed of trust.
_______________ 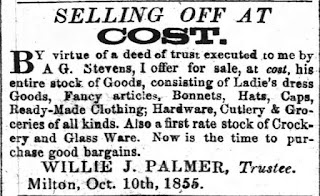 Deed of Trust Sale: Milton, NC 1855. Note that no real estate is involved.

Those who study the history of railroads (in North Carolina and elsewhere) will see attempts to finance various 19th century projects. This often was by the issuance of bonds. The document that defined the relationship between the bond issuer (borrower) and bondholder (creditor) was (and is) called an indenture. However, alone, the indenture relied only upon the general creditworthiness of the bond issuer (railroad company). But, to entice investors more was needed.

Here is where the deed of trust came in. A deed of trust often was used to secure the payment of principal and interest promised by the indenture. It transferred legal title to certain railroad property (and even income) to a trustee for the benefit of the bondholders. And, should the railroad company default on the bonds (not make interest and principal payments), the trustee could sell railroad assets for the benefit of the bondholders -- and without court proceedings.
_______________

One might question the seemingly absolute power of the trustee pursuant to a 19th century deed of trust. For example, who determined that the underlying debt was in default? First, the trustee had a legal fiduciary duty to the other parties to the deed of trust, and a breach of this duty could be challenged in court by the debtor or the creditor. And, as the deed of trust was in essence a contract, the usual principles of contract law applied. No party to the deed of trust was left without judicial recourse. Moreover, around the "foreclosure/sale" concept arose the redemption period right of the debtor.

However, none of this negates the fact that a 19th century deed of trust in most jurisdictions, including North Carolina, transferred legal title to the trustee.
______________

"North Carolina is considered a title theory state with respect to mortgages, where a mortgagee does not receive a mere lien on mortgaged real property, but receives legal title to the land for security purposes. In North Carolina, deeds of trust are used in most mortgage transactions, whereby a borrower conveys land to a third-party trustee to hold for the mortgagee-lender, subject to the condition that the conveyance shall be void on payment of debt at maturity. Thus, in North Carolina, the trustee holds legal title to the land."

1 Note that the Bank of Newbern referenced in the above 1830 newspaper notice once had a branch in Milton, North Carolina. The debtor apparently is James (Hops) Lea (1781-1834) who owned an operated a tavern at the intersection of Highway 62N and the Blanch Road. The trustee, Samuel Watkins (1880-1868), may have been the Milton businessman by that name.
Posted by RSF at 12:18 PM