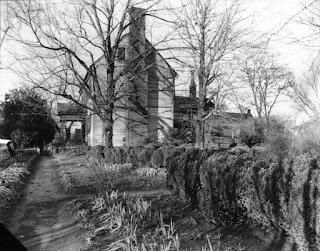 When the Town of Milton was incorporated in 1786, Henry M. Clay bought lot number thirteen. The white clapboard house, which he built in 1820 [c.1815], is tall and steeply gabled; its portico is simple and well proportioned.

The house was bought in 1830 by Nicholas Meriwether Lewis and his wife, Lucy Bullock, of Granville County. There was another Lucy, Nicholas' [sic] sister, and it was she who loved the large square garden with its borders of box. It is said that the garden was laid out by the garden designer of Mount Vernon. Be that as it may, the box was arranged in a similar fashion, and for many years this was one of the noted gardens of North Carolina. A high brick [actually stone] retaining wall topped by a magnificent hedge of English boxwood separates the garden from the street, and behind this hedge grow iris and tulips, heartsease and forget-me-nots, violets and roses. Because she loved and tended it, to this day it is called "Aunt Lucy's garden."

In 1886, after the death of his wife and sister, Mr. Lewis sold the place to his nephew, John Lewis Irvine. Today it is the home of his two daughters, Miss Anne Irvine and Mrs. N. R. Claytor.