In this photograph the building to the left was the original service station and sandwich shop operated by Jeter Arnold Fuqua (1892-1971). However, the building may have been owned by John Abner Massey (1881-1956).


When Alvis Nathaniel Briggs (1921-1990) (in photo to left) purchased the property is not known; but the building to the right was built as a restaurant, and the service station building was demolished. Today (2018), the property remains in the Briggs family but is leased.

So, what is being sold is the business. Presumably Carolyn Gentry Chambers leased the building from the Alvis Briggs daughters. However, that lease apparently did not include a clause restricting the name used for the business. Note that Carolyn Gentry Chambers stated that thirteen years ago when she assumed operation of the restaurant she intended to change the name:

“When I first came here I was going to change the name and everyone said no. They said you have got to keep the Briggs name. I had no idea how much it meant. This place has been Briggs forever."

If the new operator, Sharon Crabtree, merely assumes this lease she apparently also would be free to change the name, but, for obvious reasons, would be unwise to do so. If the Briggs daughters want the right to control the name of the business, the lease agreement should be modified.

It was Jeff Earp (who passed away January 28, 2018) who told me in 2005 that Briggs BBQ in Yanceyville was for rent. I learned this at Mickey's BBQ in Milton (run by my brother, now deceased). So, I got in touch with Bea Briggs -- the best lady I ever met and a wonderful landlord. Ms. Bea passed away March 2, 2013. I miss her every day.

It always made my day to see her coming throught that door. Always a hoot. Many of the kids (now adults) still come in and tell me that they worked or ate there when in high school. Ms. Bea knew everybody. Her daughters, Debbie Truitt and Beverly Dodson took over as owners when we lost Ms. Bea. When I came to Yanceyville, it took the people a while to accept me. But, I learned about the name. Briggs had been there forever, and Ms. Bea told me that I could not change the name; but she did allow me to add "Cafe." Now, I am proud to have been the person behind Briggs BBQ & Cafe for the past thirteen years and eight months. So, if Sharon Crabtree comes in she will keep the Briggs BBQ & Cafe name with one small change. Cafe will be changed to grill: Briggs BBQ & Grill. I understand this is for tax reasons.

I wish I had met Mr. Briggs, having heard nothing bad about him or Mrs. Bea until Rick Frederick criticized the BBQ late in his life. Well, everybody is going to get some gristle or bones in the BBQ every once in a while.

The Caswell Messenger needs to print a correction. They have me with two husbands! If you have more questions, just ask. Or, even better -- come to Briggs BBQ and Cafe.

My dad, Garnett Cooper worked part-time there [Alvis Briggs BBQ in Yanceyville] for a few years preparing the BBQ. He would get off work on his full-time job on Friday afternoons and go straight to Alvis's where he would fire up the pits and put the shoulders on. He would tend the shoulders all night. The first thing Saturday morning he would mix up the sauce. I particularly remember the large number of lemons he would slice and add to the recipe. He finished by chopping up the meat. The resulting BBQ would last Alvis until the next Friday. Then repeat. Source: Jerry Parks Cooper Post to the Caswell County Historical Association Facebook Page 14 March 2018.
_______________ 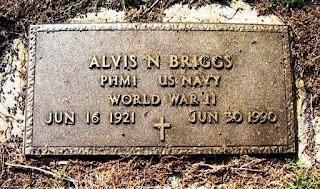 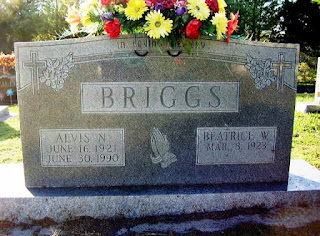