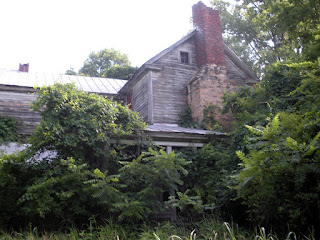 Grandpa and Granny Taylor lived about a good walking mile from us, just at the fork of the Milton and Yanceyville Road and the "round the lane" road to Purley. . . Grandpa's house was a steep-roofed three storied building with a cellar beneath it. It had tall rock chimneys at each end. On these chimneys was the inscription 1776. There was a basement, or cellar of two rooms. The front room was the dining room and the back room was used for storage. . . Years before Grandfather bought the Plantation the house was used as a Tavern or Inn to accommodate travelers riding in the stagecoach that carried the mail to Yanceyville and Hillsboro. "Old man Hop Lea" as he was commonly called, the proprietor of the Tavern or Inn was said to be very cruel to his slaves. . . .

The first story or ground floor, which was two very big rooms and a wide hall between, was ceiled with very wide boards . . . perhaps twelve or fourteen inches wide. In my Grandmother's room, where we always sat unless there was real company, there was a huge rock fireplace with a big mantle over it. Beside the fireplace Grandpa sat by a little window that looked out on the main road and the tobacco barns, the well, the stables, and the back yard. . . . Across the hall was the parlor, sacred to strange company, parties, funerals, Sundays and beaux; and where peddlers were allowed to spread out their packs. . . The stairs were very narrow and very steep, beginning with two steps up, then a platform and a turn to the main flight. Back of the platform there was a door without knobs or hinges. I think it must have opened in to my Grandmother's room at one time but was now closed up on her side. . . When we got to the head of the stairs there was the boys room on the right hand side and on the left was the room for the girls, this room was big enough to hold four double beds.
_______________