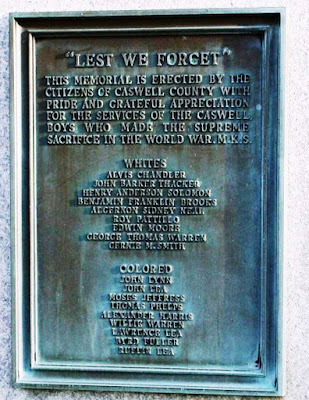 Private Byrd Edward Fuller (1895-1918), died serving his country in World War I. No he was not in combat, as few black soldiers were. He was assigned to Company D, 344th Quartermaster Labor Battalion, and provided critical support services to US troops and allies.

In September 1918, young Fuller sailed for France. Where he landed is not known. Nor do we know where he died. We do know that he died October 5, 1918, of pneumonia, and his life and service are memorialized on the tablets at the Suresnes American Cemetery and Memorial just outside Paris, France.

Byrd Edward Fuller was born March 20, 1895, in Caswell County, North Carolina, the son of Mollie Fuller. He was a stout man of medium height, with grey eyes and black hair. When he registered for military service June 5, 1917, Byrd was living in, Guilford County, North Carolina, where he worked at Proximity Cotton Mill (part of Cone Mills that produced denim cloth). On his World War I Registration Card, Byrd listed no physical disability and was shown as single. He apparently never married.

However, he had his mother and many siblings to honor his memory.
Posted by RSF at 5:41 PM