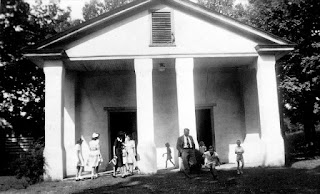 1. The original church lot, where the cemetery is located, was deeded to the trustees of the Methodist Episcopal Church September 20, 1841. A solid brick church building was constructed, which later was stuccoed over.

2. In 1910, under the leadership of Reverend J. E. Blaylock, a modest frame church was erected on Main Street Extension, not far from where the parsonage was located in 1998.

3. The 1910 building was used for four years, when the congregation became dissatisfied with it. In 1915, under the pastorship of Reverend S. F. Nicks, the old original church was remodeled, and the congregation moved back.

4. During the pastorate of Reverend I. T. Poole a log church hut was built to house temporarily part of the Sunday School.

5. On April 18, 1941, the congregation voted to purchase the John O. Gunn lot on West Main Street. The lot purchased had been part of the Johnston estate, which was divided and sold at public auction in July 1940. The final service in the old church was an Easter sunrise service April 25, 1943. The new church was formally opened Sunday, May 2, 1943, with Reverend J. V. Early presiding.

Yanceyville, N.C. -- The Yanceyville Methodist Church will observe its Centennial here Sunday morning, it was announced today. The speaker will be the Rev. J. V. Early, former pastor who is now pastor of the First Methodist Church in Smithfield. Homecoming will be observed in conjunction with the centennial, and written invitations have been sent to former pastors and members outside the county. Those living within the county have been invited to attend but will not be sent written invitations, it was announced. Records are somewhat vague, but it would appear that steps were taken to organize the church some time during 1841, and it is definitely known that the church had been established in 1852.
_______________

Yanceyville, N.C. -- Commemorating Week of Prayer and Self-Denial, a service of meditation and sacred songs will be given at Yanceyville Methodist Church tomorrow evening at 7:30 o'clock.

The service was written and will be led by Mrs Arthur Smith, assisted by a vested choir of 20 voices. Responses will be in the form of solos, duets and the full choir will sing humns that point the theme of "Faith, Hope, Love and Prayer." The central theme "The Altar of the Heart," will be dramatized by the choir.

The service is open to the public.
Posted by RSF at 1:19 PM