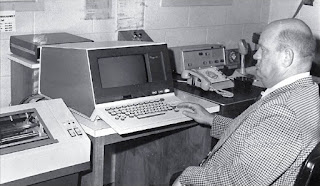 Bobby Edward Poteat (1930-1996) joined the Caswell County Sheriff's Office as a deputy in 1957, being hired by Sheriff Lynn Banks Williamson. In early 1966, Poteat resigned his deputy position to run for Caswell County Sheriff against his old boss, Frank Daniel, who succeeded Williamson in office. Poteat supporters cited "problems" in the sheriff's office, including in 1965 the sudden departure from the county of a deputy sheriff and the wounding in the leg of another deputy by a man supposedly his prisoner.

However, Poteat was to have his own "problems" in the sheriff's office, including all his deputies walking out (striking about pay), controversy over which deputies were allowed to return, and being convicted of lying to a federal grand jury (sentenced to two years in prison).
_______________

At midnight July 1, 1976, all twelve Caswell County Sheriff Deputies walked off the job after being refused a pay raise by county commissioners.
_______________ 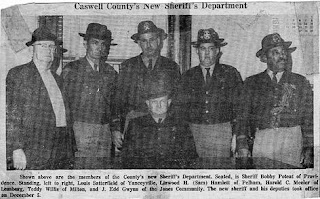 Many of the striking deputies were allowed to return to their jobs, but not all. Included in those denied reinstatement was James Hurdle (Hurley) Webster, even though hundreds of Caswell County citizens signed a petition in support of his reinstatement.
_______________

In 1978, Caswell County Sheriff Bobby Edward Poteat was convicted of lying to a federal grand jury August 15, 1977 when he denied taking payoffs from operators of a house of prostitution in Caswell County near the Virginia state line.

Robert Taylor Bell testified that he paid Poteat $250 per week from early 1972 until October 6, 1972, when the FBI raided him and he shut down.

Bell leased the establishment to Harold Dowdy who reopened in March 1973 and testified that he agreed to pay Poteat $150 per week.

Herbert Boyd testified that he operated the place for a short time in 1974 and made one payment of $300 to Poteat.

In his closing argument to the jury in the federal criminal trial of Caswell County Sheriff Bobby Edward Poteat, lead defense counsel Robert Blackwell stated: "Are you going to believe the word of prostitutes, pimps and convicted felons and convict this man who has been in law enforcement for 21 years?"

Blackwell's arguments were not successful as the jury took little time to find Poteat guilty. However, US. District Judge Glen Williams imposed a very light sentence on Poteat, including no fine. The judge stated that a fine could impose a hardship on Poteat's family.

Lawyer Blackwell stated that the verdict and sentence would be appealed. That never happened.
_______________

Caswell County Sheriff Bobby Poteat, who has until January 5, 1979, to report to prison for a two-year term for lying to a federal grand jury, has resigned as Sheriff of Caswell County.

He was immediately replaced by J. E. Smith, Jr., who was scheduled to take office next month. Smith defeated Poteat in last May's Democratic primary.

Poteat stated in his resignation letter: "I will always cherish my years as a peace officer serving the citizens of our fine county during which time it has been my goal to provide competent, efficient and dedicated law enforcement."

Poteat's letter of resignation was presented to a special meeting of the Caswell County Board of Commissioners.

The reporting on the federal conviction of Caswell County Sheriff Bobby Edward Poteat is not complete. For example, not known is why he was convicted of lying to a federal grand jury and not of the underlying offense of taking bribes from a prostitution ring? One can speculate: those who paid the bribes cut a deal with the federal prosecutor: testify against Poteat and we will go lighter on you (including not pushing the bribery counts).
_______________

What did Caswell County Sheriff Bobby Poteat do to so outrage citizens of Yanceyville that they took steps to have a separate police department?
_______________

By many indications, even though he was elected three times, Bobby Poteat's years in office were a serious train wreck.
_______________

During his tenure, Caswell County Sheriff Bobby Poteat was regularly criticized by black-owned wrecker services for not being called by the Sheriff's Department even when there was a wreck only miles from their businesses.
_______________

Sheriff Bobby Poteat was from Providence, Caswell County, North Carolina, and a member of the Providence Baptist Church. He served in the Korean War and may have been married twice: Margaret Anne Murphey (1950); and Foy Ann Weadon (1984). At least two children are known. Before becoming a Caswell County Sheriff Deputy he was Dan River Township Constable.