1. The first "public" way to cross the Dan River at Milton probably was a ferry, but this early ferry has not been documented.

2. Pursuant to the 1822 charter, a toll bridge was constructed (construction date unknown), and this bridge washed away in August 1850.

3. Pursuant to the 1851 charter, another toll bridge was built (but not until after March 1859), and this probably is the bridge referred to as being twelve inches under water during the May 1873 Dan River "freshet."

4. Something, unknown, apparently happened to the 1851 bridge as a ferry was in operation just before the 1906/1907 steel toll bridge was built.

6. The 1906/1907 bridge was replaced in the early 1940s by a new steel bridge. This bridge may have been donated by the City of Danville (but not confirmed). 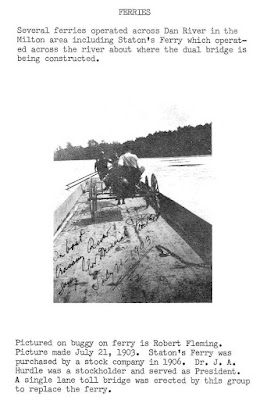 The following is from: Motley, Charles B. Milton, North Carolina: Sidelights of History (1976):

"Pictured on buggy on ferry is Robert Fleming. Picture made July 21, 1903. Staton's Ferry was purchased by a stock company in 1906. Dr. J. A. Hurdle was a stockholder and served as President. A single lane toll bridge was erected by this group to replace the ferry.

"It later was determined that approaches to the bridge should be changed which would require additional capital. E. B. Foote (father of J. B. Foote of Milton) purchased substantial stock and served as President of the Milton Bridge Company.

"This toll bridge operated until the 1930's when it was purchased by the State of North Carolina for a nominal amount.

"The State of North Carolina erected another single lane bridge about 1940-41. This bridge was moved from a Virginia location and is being used today (1976). 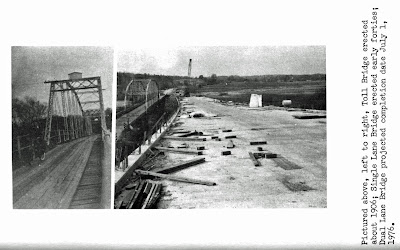 "Yesterday the Milton bridge committee awarded to the Canton Bridge Co., of Canton, O., the contract for the long looked for and much desired steel bridge across Dan river at Milton, N.C. It will be a neat and substantial structure occupying the present ferry site just opposite the town and will doubtless prove of the greatest benefit and convenience to the travel and trade between that town and this city. It will be a toll bridge for some time at least, but the charges will be very moderate and in the case of tobacco being brought to the market the warehouses here will remit the tolls and it is believed that our merchants will ere long organize to repay the tolls to all others who come here from Milton to buy goods.

"The contract calls for the completion of the bridge within six months or in plenty time for the fall trade and the new crop of tobacco.

"The enterprising gentlemen to whom great credit is due for this additional avenue to the city are:

"The stock company which was organized some time ago for the purpose of erecting a bridge across Dan river at Milton, has succeeded in purchasing the Milton ferry, which for so long a time has been the obstruction in the way of the construction of the bridge. By summer the bridge will probably be completed."

For many years the bridge across the Dan River at Milton, North Carolina, was privately owned and charged a toll to cross. Local citizens came to resent the toll, which they viewed as unreasonably high. In 1923, 400 such citizens petitioned the Caswell County Board of Commissioners for a 50% toll reduction. The commissioners reduced the toll by 25%, but the locals were not satisfied.

One of the complaints was that some children who attended school in Milton were forced to cross the bridge each school day and pay the toll.

A letter to the commissioners in support of a further toll reduction was submitted by Col. W. L. Chapman:

"As one of the four hundred or more persons who petitioned your body several months ago, and one who is deeply interested in this matter, I have thought it advisable to state more of the grievances we have to complain of:

"Since the bridge has been built the highways leading to it have been built at considerable cost; and added much to the travel and revenue from tolls charged for passing over the bridge. I will add further that we contributed in the past two years $450.00 in money to the building of highways from Danville to Milton, also gave the right of way for more than 600 years of our land, leaving a narrow strip of land between the present road and the old road.

"I was informed by Mr. Winstead, who is acting as our attorney before that body, that at the August meeting you issued an order requiring the bridge company to reduce their tolls 25 percent. In carrying out your order for this reduction they withdrew from sale to those who desired bridge tickets the privilege of purchasing those tickets at a reduction of 22 1/2 per cent on the old rates of toll. This leaves the persons who use the bridge more frequently on a worse predicament they were in before. We had asked a reduction of 50 per cent of the original charges and you instructed the company to reduce charges only per cent . . . .

"I have no doubt if the matter was taken up by the people who are affected, a free bridge would be built across the Dan River at Milton."

The commissioners were to have taken up the issue at a meeting December 3, 1923. No record has been found of the board's decision.

In the reminiscent written by Fielding Lewis Walker beginning in 1918 he says the following:

"My father (Dr. Ajax Walker) owned 50 acres, half of which was in North Carolina and half in Virginia. (He owned and lived in Fairview, Marion Thomas house now). He also owned the toll bridge over Dan River at Milton which was washed away by high water in August, 1850, a few months after he died."
_______________

"The principal topic of conversation the past week has been the late freshet, which was truly distressing. The tide commenced rising last Wednesday very rapidly at the rate of 1 1/2 feet an hour for 24 hours till it reached 37 feet above low water mark. The highest water since 1795, and 6 inches higher than the big freshet of August, 1850. The water on the Milton bridge was 12 inches deep and it came very near carrying it away. Shelton's mill was undermined and the grist part of the mill washed away, the saw mill injured, and about 30,000 feet of lumber swept away. The losses up and down Dan river are very heavy, estimated at $50,000. The low grounds are washed terribly, the damage to the wheat crop is great, and it will be necessary to replant corn. Houses, furniture, a new buggy, any number skiffs and flat boats, any kind and style of timber you could call for passed here on the bosom of the Dan. We are happy to state that no lives were lost, though we hear of many narrow escapes."
_______________

In some cases building bridges was very expensive and either insufficient public funds were available or the Caswell County executives (justices of the Court of Pleas and Quarter Sessions) decided not to spend public funds for that purpose. This led to a toll bridge over the Dan River at Milton. In 1822, the North Carolina legislature incorporated the Milton Toll Bridge company to build a bridge over the Dan River at Milton and empowered Commissioners Alexander Henderson, Romulus M. Saunders, John Raglin, James Holder, and David Ryle to sell shares. The sum of $10,000 was authorized, and a schedule of fees for use of the bridge was set:

In 1851, another Milton Toll Bridge Company was established. Commissioners were Samuel Watkins, Willie Jones, John Wilson, William L. Stamps, and Nicholas M. Lewis. The authorized capital was $12,000, and essentially the same fee schedule was approved as in the 1822 charter. However, the toll for two-wheeled carriages of pleasure was reduced by five cents (to twenty cents), with the toll for a single horse raised by five cents (to ten cents).