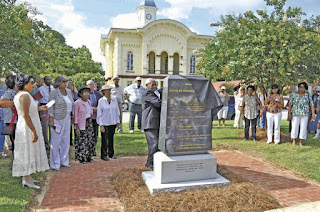 
Hundreds of Dillard’s former students attended the ceremony for the man that help shape their future. “I went to the Caswell County School from first grade to twelve. He was just like a father to me,” said Hilda Moore Watlington, Class of 1965. “There was my sister and three brothers and all of us went there for twelve years.”

Everyone in attendance seemed to echo Moore’s thoughts. Donna Graves who was in the class of 1966 said, “He was a kind, generous man. He was willing to help everybody in the community. He opened a new school and he helped us with the school.”

Michael Little spoke on his neighbor and principal, “Mr. Dillard was a man that everyone looked up to and respected. His wit his intelligence his humor and his caring nature drew many students to him. He could talk about the love of physics and the 23rd psalm in the same breath.” He added that some of Dillard’s notable quotes included, “Bricks, mortar and steel will decay but the spirit of good character, honesty, love and faith have staying power that will outlive stone and steel. Honor, dignity and intelligence are all that your alma mater request from you.” Many of Dillard’s most famous quotes are engraved on the back of the monument in hopes they will lead future generations to a successful life.

On hand were Dillard’s children, twins Anthony Dillard and Annette Coward. “They all seemed to love him,” said Anthony of the students. Anthony added that Dillard was a great teacher, mentor and a great father. “He gave as much as he could to his family. We knew what his interests were and we never interfered. We told him, ‘Follow your star and we will follow in behind.’”

“He treated us just like his students,” said Annette. “There was no difference. He showed us love and he showed everybody love.”

Annette said that her father cared about his students both in the classroom and on the outside. “He got to know people. He would go to Danville sometimes and stand on the corner looking for some of his students. And they would come by and he would know. He knew almost every student.”

“He was proud of his bus drivers and the custodians and all his staff. He got to know everyone personally,” remembered Annette. “We need more of that today because it takes everybody to make the school work.  He fought to get the things we needed education. He accomplished a lot. It made him very proud too.” She said that the Class of 1966 is to be commended for their hard work and for bringing all of the graduates from the Caswell County High School together again. Annette added that she thought the monument was wonderful. “It is beautiful. It is so pretty.”

Byrd said that she and the rest of the committee meticulously went over every detail of the monument. She added that it was important that it had meaning to those who saw it.

The keynote speaker for the event was Dr. Emilie Vanessa Siddle Walker who wrote a book about Dillard and the Caswell County Training School. “Caswell County High School taught students to read and what they could achieve,” said Walker. “Mr. Dillard said ‘It is my sincere hope that you always remember that old CCHS will never graduate another senior class, but it will live on. Write your name on the pages of time.”

Walker said that Nicholas Dillard’s name is known across the globe. “The last 20 years across this country and even around the world, most recently in Greece this past May, the words Mr. Dillard and Caswell County High School were passed around.”

Walker said that she spent seven years doing research for her book before she could “understand the resilience of the African American community- one that refused to be defined by the inequalities and pressed overtly against oppression- and in doing so, created their own system of schooling that did have goodness.”

“I learned that this school reshaped the negative messages from the wider society about the place of blacks in America’s society and helped children believe in what they could achieve,” said Walker.

As she finished, she said, “Mr. Dillard you were right. 50 years later CCHS is just started to make its contribution to history. What a powerful legacy he created!”

On behalf of the Dillard family, I wish to thank the county commissioners and particularly Ms. Tresca Byrd and Ms. Betty Graves and the Caswell County High School Class of 1966 for bringing to fruition the unveiling of this monument in honor of my father, the late N. L. Dillard. This monument is a means of drafting history and illustrates one of my father’s ideas that the present plight of students did not determine their destiny for their destiny lay in their own hands.

I also want to thank Ms. Paula Seamster, of the Caswell County Historical Association, Ms. Patti O’Keefe, Editor of the Caswell Messenger and all churches, businesses, and community organizations who were supporters of this grand undertaking. I would also like to thank our guest speaker Dr. Vanessa Siddle Walker for writing and telling the story of Dear Old Caswell County Training School as expressed in her book (Their Highest Potential, An African American School Community in the Segregated South).

Someone recently wrote that it you don’t turn your life into a story, you just become a part of someone else’s story, and Aldous Huxley observed that every person’s memory is their own private literature. As indicated in the program, one of my father’s favorite quotations was by George Washington. the nation’s first President who said, “Let us raise a standard to which the wise and the just can repair, the events are in the hand of God.” There are two words in the quoted passage that give a clear example of what my father was like, and they are that he liked to ix, and repair things and to right the wrongs that interfered with children in his school getting a good education.

According to Mr. Warren McCain, Class of 1953, the most powerful force on this earth is love, and for my father love was a circle that lowed from the Principal to the faculty, from the faculty to the students, from the students, to their parents, from the parents to the church, and from the church to the community. My father knew that with a dedicated faculty, and with the support of parents, the churches and the community, great events and great outcomes could be expected. He often emphasized the importance of an education in his talks to students in Friday’s Chapel Assembly by noting that a carpenter is no better than his or her tools. My father would have to agree with Emma Chase the New York Times writer who said that “Education is the key to unlocking all doors, it is a treasure that can never be stolen and it is a most durable safety net.”

One of my father’s greatest strengths was his vision and foresight. My father worked with the parents to open up a cafeteria to keep the students from having to walk uptown during their lunch period. In designing plans for the new high school that opened in 1951, it was his foresight that resulted in the building of an auditorium rather than a gymnasium. He anticipated that the parents could later serve as a better advocate for a gymnasium.

In Greensboro recently, the founder of Hester's Day Care and Creative School passed and in her obituary were the words of her favorite quotation by Confucius which is a reflection of my father’s love for children. Confucius said, “To plant for a year, plant rice, to plant for a century, plant a tree, to plant for eternity, educate a child.” In my father’s view, it takes generations to build culture and every generation stands on the shoulders of those who came before. Every generation must give more in life than it takes. As the artist Bob Timberlake says in one of his books, “Just when the caterpillar thought the world was over it became a butterfly” and “Do not go where a path may lead, go instead where there is not a path and leave a trail.” In the words of Oprah Winfrey, “The more you praise and celebrate your life, the more there is in life to celebrate.” We thank you for this monument which will be cemented in our memories and will serve as a time capsule for future generations. It is indeed a most fitting tribute to my father’s legacy.