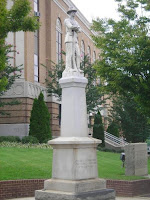 On June 28, 1873, a public "Meeting of Confederates" was held at Roxboro, Person County, North Carolina. The purpose was to consider measures for preserving the record of Person County in the Civil War. The meeting was chaired by J. J. Lansdell, with John L. Harris and N. N. Tuck acting as secretaries. Five were appointed to a committee to report steps necessary to preserve the Person County Civil War records: H. T. Jordan (chairman), James Holeman, Jr., S. C. Barnett, James M. Burton, and Samuel A. Barnett.

"Whereas, we have learned with pleasure that the Sentinel newspaper published at Raleigh, and the Journal of Commerce newspaper published at Newbern, have determined to rescue as far as they may be able the record of North Carolina in the late war; and whereas, many soldiers went from Person county into the war and we are thereby enabled to contribute to the work of the Sentinel; and whereas, no battle was fought in this county, and we are thereby unable to contribute anything to the labors of the Journal of Commerce, except subscriptions to its list of patrons,

Resolved, That we heartily commend the purpose of both these useful and patriotic journals.

Resolved, That in furtherance of the plan of the Sentinel we appoint a committee of one in each school district to gather up, arrange and report all facts, names, &c, as called for by the plan of said newspaper, and that said report be made at the earliest day possible to the committee provided for in the next resolution.

Resolved, That a committee of seven be appointed to whom the district committees shall report, who shall aggregate, collect, arrange and write out in connected historical form the materials furnished by the sub-committees and prepare them for publication.

It was ordered that the Historical and District Committees meet at Roxboro, on the second Saturday in July. It was further ordered that a copy of the proceedings of the meeting be sent to the Sentinel and the Journal of Commerce with request for publication.

Roxboro Confederate Monument:  Captain E. Fletcher Satterfield, who was killed on July 3, 1863, while bearing the flag of his regiment, the 55th North Carolina Troops, at Gettysburg.
Posted by RSF at 1:17 PM