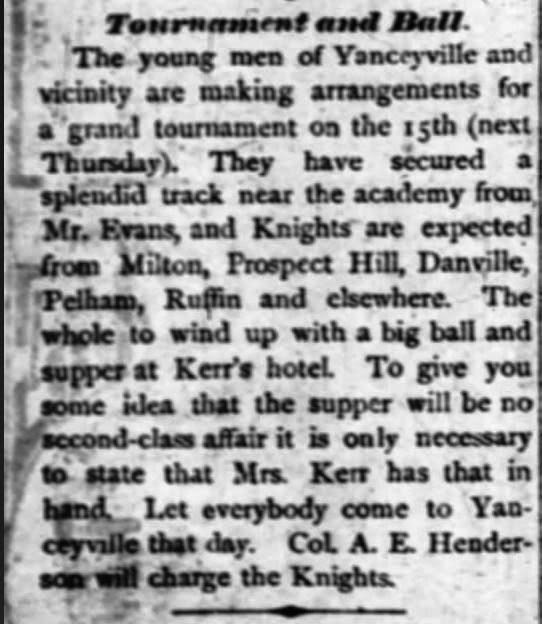 The young men of Yanceyville and vicinity are making arrangements for a grand tournament on the 15th (next Thursday). They have secured a splendid track near the academy from Mr. Evans, and Knights are expected from Milton, Prospect Hill, Danville, Pelham, Ruffin and elsewhere. The whole to wind up with a big ball and supper at Kerr's hotel. To give you some idea that the supper will be no second-class affair it is only necessary to state that Mrs. Kerr has that in hand. Let everybody come to Yanceyville that day. Col. A. E. Henderson will charge the Knights.

The rain early Thursday morning kept many from attending the tournament, but by noon the men came out and very good crowd turned out from town and the surrounding country. If it had been a fair day there would have been 12 or 15 Knights, but only seven reported: Chas. Vernon, Knight of "Sunny South"; S. H. Williamson, "Night Before Last"; R. A. Pointer, "Silver Cross"; J. W. Vaughn, "Cosnicpelne"; E. L. Graves, "Yanceyville"; J. C. Pinnix, Jr., "Caswell': G. L. Williamson, "Billy Bowlegs." Col. A. E. Henderson charged the Knights. Every word was appropriate and it was clearly and impressively delivered. After several trial rides the contest began and in three rides Mr. Pinnix took 9 rings for Mr. Vaughn but his last ride was ruled out as not in time and first honor given to Mr. Graves with 8 rings, 2d honor to Mr. Vaughn, Mr. Pinnix 3d, and Mr. G. L. Williamson 4th.

The real pleasures of the occasion, to the greatest number, were at the ball -- enjoyment to those who danced and entertainment to those who went to look on, and, all, after appeasing the demands of the inner man from the well laded table in Mrs. Kerr's dining room, declared the tournament and ball a big success.

Whether this photograph is of the tournament described above is not known. However, it is of a tournament held at some time in Caswell County, North Carolina. The location may have been the original fair grounds in Yanceyville, North Carolina, but this has not been confirmed.

On September 15, 1857, the resort town of Shocco Springs in Warren County held the first known medieval jousting tournament in North Carolina. It did not involve riders knocking each other off their horses. Instead participants used lances to spear a three-inch ring off a post.

Such "ring tournaments" became fashionable among the well-to-do in North Carolina in the late 1850s and, after a hiatus during the Civil War, they experienced a revival that lasted until the 1870s.

The 1857 contest attracted contestants from as far away as Florida and Texas. Pageantry, costumes and assumed titles (like "the Knight of the Black Cross") combined with themes of chivalry, honor and the virtue of womanhood at the festivals. Many times they culminated in the crowning of a "Queen of Love and Beauty."

A newspaper account described the scene: "The Knights were splendidly accoutered, and as they flew past the stand with lances in rest their success was announced by loud cheers mingled with bursts of martial music, which irresistibly carried our thoughts back to the thrilling pages of Ivanhoe…"

Color Photograph: Medieval tournaments like this one were the inspiration for the tournament at Shocco Springs and similar events across the South. Image from Tallahassee Magazine.
Posted by RSF at 12:57 PM