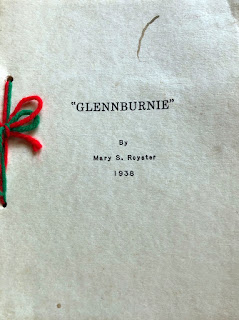 Glennburnie by Mary S. Royster, 1938, is a handsome little privately printed 17-page, one-sided, loose-leaf piece, tightly bound through three holes with a doubled silk rope with tassel. It is so tightly bound that it cannot be opened wide enough for photocopying (the pages would break) without being completely disassembled, including undoing the intricate ribbon with tassels, copying the pages singly, then reinserting and retying the double silk rope (that in itself would require a delicate hand to prevent further damage). (Toward the back of the 17 pages is a two-page poem titled "The Scions of Glennburnie," composed and sung by Mrs. E. J. Stamps and dedicated to her children.") The text is double-spaced, so hand copying the entire 19-page item would not be a terribly lengthy job if one of the girls would come to the North Carolina Collection for several hours. A sandbag (furnished by the staff) would be needed to hold down the left hand bent pages during copying---again careful to prevent breaking the paper. The piece was put together obviously as a keepsake or artifact rather than a cataloged library item---beautifully done but without consideration of its preservation potential. H. G. Jones 14 August 2012. 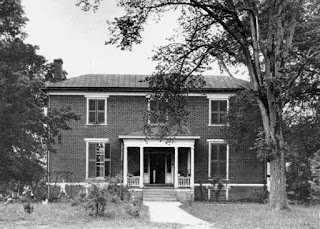 Glennburnie was the name of a plantation [and house] just south of Milton, North Carolina. The house no longer exists. I believe it belonged to the Stamps family. A daughter of that family married the founder (or at least a principal owner) of Royster Fertilizer Company. They lived in the Norfolk, VA area. This daughter wrote and privately published a little booklet about what life was like at Glennburnie when she was growing up. I learned this 10-15 years ago during the time that my family owned and operated Woodside Inn in Milton, NC. We had as guests one weekend, a judge and his wife from Alexandria, VA. He is a direct descendant of this daughter and he had a copy of this little booklet. With a few phone calls to some Milton "oldtimers" we found the location and this couple made a pilgrimage to the plantation home site. They returned with a brick which was probably in the foundation of the house.

They had a copy of this booklet made for us, and we have it somewhere in our archives from the years we operated the inn. I could not quickly find it now and do not have time to search. However, later in the winter when I have time to find it, I would provide copies in exchange for a contribution of at least $10 to the Caswell County Historical Association to benefit the county History Museum in Yanceyville. 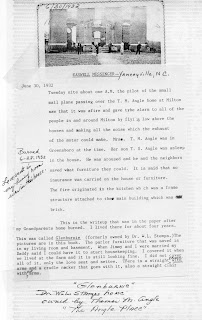 The Caswell Messenger (June 30, 1932): Tuesday night about 1 a.m. the pilot of the small mail plane passing over the T. M. Angle home at Milton saw that it was afire and gave the alarm to all of the people in and around Milton by flying low above the houses and making all the noise which the exhaust of the motor could make. Mrs. T. M. Angle was in Greensboro at the time. Her son T. S. Angle was asleep in the house. He was aroused, and he and the neighbors saved what furniture they could. It is said that no insurance was carried on the house or furniture. The fire originated in the kitchen, which was a frame structure attached to the main building, which was brick.
_______________

This is the writeup that was in the paper after my Grandparents home burned. I lived there for about four years. 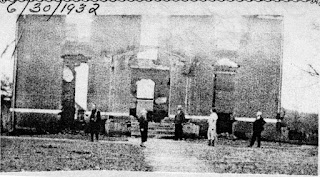 This was called "Glennburnie" (formerly owned by Dr. W. L. Stamps). The pictures are in this book. The parlor furniture that was saved is in my living room and basement. When Jimmy and I were married my Daddy said I could have it to start housekeeping. I covered it when we lived at the farm and it is still looking fine. I did not cover all of it, only the love seat and settee. There is a straight chair with arms and a cradle rocker that goes with it, also a straight chair without arms.

Montrose and Lois Angle had three children: Lois Sydnor (10/6/1925), Robert Thomas (9/12/1927) and Margaret Johnsie (11/19/1929). Lois Sydnor married James Stephens Love on February, 1949 in the Presbyterian Church in Milton and they live in Danville, Virginia. they have four children: Steve (Jr.), Harriet Newman, Edgar Montrose, and Jean Sydnor. Robert Thomas married Lucy Jane Perkinson in the First Presbyterian Church in Danville on February 27, 1954 and they reside in Milton and have three children: Nancy Louise married to Carl Carroll; Robert Edward, and Clay Benton. Margaret Johnsie married John Miller Wells Crowley from Wilmington, N.C. in 1957 at home in Milton. They live in Wilmington and have four children: Johnsie Lynn married Gene Atkinson and they have two children, Tonya and Jason; Martha Katherine married Donald Morton and they have a daughter, Amanda Christiane; Robert Sidbury and Elizabeth Dail.

Adding my small bit of information about the Angle family has been a joy to share. Milton is a very, very special town and those of us who grew up there have many fond memories; such as, afternoons at "Big Rock." When we girls went down and yelled "girls" the boys would not get out and put their clothes on, so we had to enlist the help of parents; climbing in Aunt Fannie Gordon's apple tree on the way home from the creek; roller skating down the sidewalk next to "Miss Whits" rock wall; taking turns riding on Mr. Kilby's running board; sitting on the Episcopal Church steps where everyone gathered to chat; going to all the churches in town and feeling such a part of each, and reaping the rewards of wonderful lessons taught by our family, friends, teachers and neighbors.