A Carolina Legacy Carved In Wood 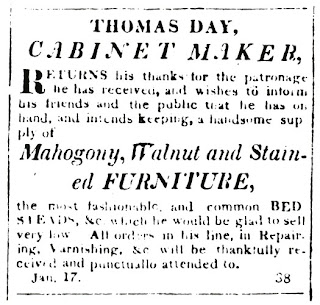 I came to the 20-mile square that is North Carolina's Caswell County in search of traces of a relatively unheralded 19th-century free-black cabinetmaker named Thomas Day. I had been fascinated by a picture of one of his unorthodox newel posts that I had come across in a book on regional architecture: It was not a straight post, but an open, jutting spiral, and I had heard that there were still pieces of his furniture about, both in a museum in Raleigh and in many of the houses in the area. Day had had his workshop in the town of Milton and had done the interior woodwork in several of the grand houses in Caswell County in the years before the Civil War.

Milton, N.C., has a population of almost 400, half black and half white. It lies about eight miles east-southeast of Danville, along the lumbering Dan River, the river memorialized in the men's shirt ads ("Dan River Runs Deep" - whatever that's supposed to mean). People here tell you that early in this century, the large textile-manufacturing company that makes those shirts wanted to locate its mill along the river in Milton, but the town said no - a factory would scare the horses. So the factory ended up in Virginia, and Milton, along with the rest of Caswell County, has remained fairly unchanged since the Civil War.

Caswell County has a strangely haunted look today. Several of the grand old homes stand empty and uncared for. Day's life there was not all idyllic either. Three years before he died in Milton, in 1861 at age 60, he was declared insolvent. Several of his clients had defaulted on their payments, and he was forced to give up the Yellow Tavern and move to a farm outside of town. What Thomas Day left behind, though, is a legacy the people of Milton cherish more than any other part of their history. Because of that - and just possibly with a small sense of guilt that their ancestors left Day in the lurch - the people of Milton will probably succeed in building that museum to his memory and to his work.
Posted by RSF at 8:33 PM