The Legacy of Thomas Day 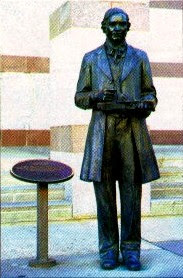 The Legacy of Thomas Day


The deserted streets of Milton, N.C., on a January afternoon are a world away from the crowds and bustle of the furniture showrooms of High Point. Just across the Dan River from Virginia, Milton is a tiny speck on the map. If not for the one traffic light, the unwary traveler might fly down U.S. Highway 57 without realizing that these three blocks of tidy shops and pretty antebellum homes contain the birthplace of some of the hottest antiques and reproductions on the market today.


In the pale winter sun, there is a two-story crumbling brick building with broken windows and yawning arched doorways. At first, it seems completely abandoned and neglected. But the whine of a saw and a panel truck out front hint that there is life in this quiet place.

Indeed, there are Herculean efforts being made to restore the building and even turn it into a museum, for this is the famed Union Tavern, sometimes known as the Yellow Tavern. This was a home and shop of Thomas Day, North Carolina's most famous cabinetmaker and furniture craftsman.


Walking through the chilly, dark shell of the building that was tragically gutted by fire 10 years ago, one can only imagine the vibrant activity that once was centered here. Having converted the tavern to his home and one of several shops, Day became one of the largest furniture manufacturers in North Carolina, achieving fame that was rare among craftsmen. Classically inspired furniture and architectural millwork were built here by hand and, later, by steam-powered machinery. His wealthy clients included two N.C. governors. Day was commissioned to furnish the interior woodwork in one of the original buildings of UNC-Chapel Hill, and his work was acclaimed from Georgia to Virginia.


Born in 1801 in southern Virginia, Day came from a rare, fortunate family that had been free African Americans for several generations. Along with his brother John, he was formally educated by private tutors and apprenticed with his father, John Day Sr., a moderately successful cabinetmaker.


Early 19th-century Virginia saw increasing restrictions against free blacks, so the Day family moved to North Carolina, just prior to a law forbidding such relocation. By 1825, his brother John had set up shop in Milton, while Thomas spent two years in Hillsborough, manufacturing "all kinds of mahogany, walnut and stained furniture," according to the local advertisements. As his brother decided to pursue religious studies and then missionary work, Thomas moved to Milton and built the business and reputation that are his legacy today.


Over the next 30 years, Day lived an extraordinary life. Under his influence, Milton thrived. His impeccable craftsmanship was highly sought after by the wealthiest and most influential clientele. He succeeded in maintaining his dignity and prosperity in the face of enormous and increasingly bitter racial barriers. And his work is prized in a modern world hungry for a tradition of excellence and imagination.


Day's work spans a variety of styles. He was a master of the Federal, Gothic, Late Classical and Empire styles that were all the rage at that time. But like many of his contemporaries, he became adept at adding his own stamp of creativity to these designs. Jonathan Prown, curator of furniture and sculpture at the Colonial Williamsburg Foundation calls this vivid stylistic category "carpenter Gothic." For instance, working with mahogany and other fine wood, Day would embellish tables and chairs with classical scrolls and curve designs, then add the unique flourishes for which he is best known.


His famous overmantel at the Long House in Caswell County is an example of this augmentation from the mundane to the sublime. It features the expected classical columns and Gothic details, but also includes highly innovative carved faces that some have compared to West African art.
These inventive decorative motifs, as well as his painstaking craftsmanship are characteristic of his pieces, and reason enough for his work to remain sought after by collectors today. Indeed, the furniture that he built for Gov. David Reid is now part of a permanent collection in the N.C. Museum of History in Raleigh.


But it is Day's own story, as a free man of color surviving and thriving during an extremely difficult period of history, that fires the imagination and amplifies the importance of his work.
Thomas Day challenged many of the deeply entrenched racial and social injustices of the antebellum South. When his wife living in Virginia was forbidden to joint him in North Carolina due to a law that prohibited free black immigration, he threatened to move himself and his shop out of state. His fame and influence had become such that the N.C. attorney general, among others, persuaded the state legislature to pass a special exemption for Mrs. Day.
Just up the street from the restoration work at the Day house, you can visit the Milton Presbyterian Church. The beautifully crafted pine, poplar and walnut pews that still grace the elegant little church were hand-built by Day in exchange for his family's right to sit in the section reserved for whites.


Yet, as Laurel Sneed, executive director of the Thomas Day Education Project points out, Day was a complex character, not easily pigeonholed. As a man of wealth and prestige, he owned slaves himself.


As Sneed explains, he defied the odds against him in his own way and challenged the assumptions that slavery was based upon. Day's private, deepest feelings about his own multiracial heritage may never be known, and the extent to which his African heritage influenced his work is a subject of debate. His work, however, speaks volumes in its beauty, creative spirit and consummate craftsmanship.


Thanks to the educational efforts of Sneed and others like her, as well as the recent special show of his work at the N.C. Museum of History, Thomas Day's work is enjoying renewed interest and wider recognition. Vacation tours for antique collectors from as far away as Los Angeles are including visits to Milton. Thomas Day pieces are increasing in value and being snapped up by savvy collectors everywhere.


In fact, with a seemingly insatiable demand from an enthusiastic public, his original works are becoming so rare that Craftique Furniture in High Point has launched an exclusive new line of reproductions. These are meticulously copied with the generous permission of the originals' owners, numbered and registered with a certificate of authenticity. Best of all, a portion of the proceeds are donated to the nonprofit Thomas Day House/Union Tavern Restoration Committee.


With that money, plus the tireless grant-writing and campaigning of the Restoration Committee's president, Marian Thomas, the Thomas Day House is slowly rising from the ashes and will become a museum of his life and work. One of fewer than 40 buildings in North Carolina that are listed as National Historic Landmarks in the National Register of Historic Places, the building is being carefully restored, as funds permit, by architects Jo Ramsey Liemenstoll and her husband, Jerry. By summer it is hoped that the building will be weatherproofed and stable. With luck and the awareness of an appreciative public, the inspired vision of Thomas Day will have a deserving home.


Thanks to Laurel Sneed, executive director of the Thomas Day Education Project, for her help in researching this article. For information about the restoration of the Thomas Day House, contact Ms. Marian Thomas, Box 39, Milton, NC, 27305.
Posted by RSF at 3:59 PM